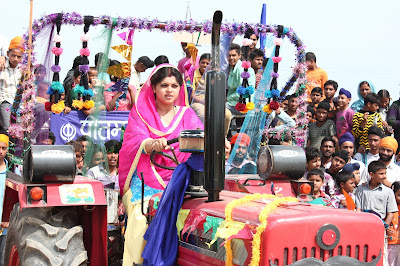 Star plus’ show Veera, produced by Beyond Dreams Entertainment (P) Ltd., recently put forth a visual extravaganza by organizing the Rural Olympics for the very first time on Indian Television. The highlight of the sequence however was the tractor race which featured Ratan, the female protagonist, competing against all men. It was indeed woman-empowerment at its best.

But this is not it. Actor Sneha Wagh, who has a passion for driving volunteered to do the action sequences herself and exhibited immense strength and courage in doing so. The entire event was brilliantly shot and executed.

We bring to you an exclusive interview of Sneha as she shares her experience with regards to the tractor race and her recent trip to Amritsar and Golden Temple.


How did it feel to be the only woman riding a tractor at the Rural Olympics?

Sneha: It was indeed an amazing experience. There were so many tractors, all decorated colorfully and I was the only woman among all the men around. To be honest because I love driving, when we did the first master shot of the tractor race I actually came first even though the script did not demand Ratan to be the winner. The entire direction team kept telling me “Mam aapko first nahi aana hai.” But it felt really good when all the women standing in the crowd started clapping for me. They were really proud of me. 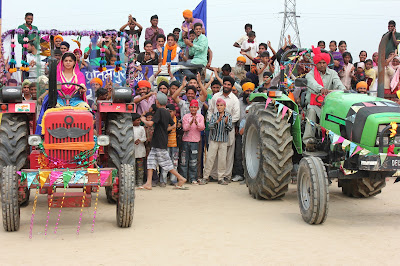 How did the men react to your driving skill?

Sneha: After seeing my josh in the first master shot, the men took the competition very seriously and during the second master shot they were all determined to defeat me. Unlike men, I had to stand on the break inorder to stop the tractor from moving ahead and it was hilarious. Nonetheless everyone around were very impressed with my driving skills and praised me big time.

How did it feel to get mobbed in Punjab?

Sneha: First two days were absolutely crazy and we had no idea as to how we would go ahead with the shooting. People were pulling and pushing and there was complete chaos around. Fans were continuously calling out our names ...Ratan Parjaeeji, Veera, Ranvi, Nihaal.  Infact Waseem sir even now teases me by calling “Ratan Parjaeeji”. But then again the fans’ reactions were overwhelming because it was purely love.  Since our show is based in Punjab, one gets to witness such heart-warming love of viewers as you visit the interiors of Punjab. 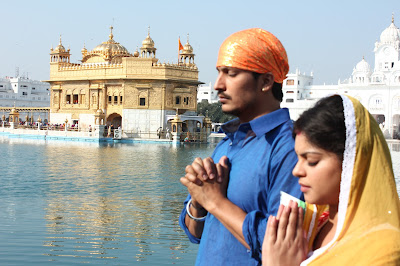 Tell us about your experience at the Golden Temple?

Sneha: I visited the Golden Temple for the very first time.  It was an amazing feeling. It was as if the divine power was calling me...come...come!!! Even though we were shooting, we were not very sure if we would get an opportunity to go inside the temple. But the moment the shoot got over, a few of us from the cast and the crew got the opportunity to go inside the temple and pray.

So are you a very religious person?

Sneha: I am spiritual but not religious. I am not someone who visits temples regularly. I believe in the universal power and that belief is very strong.

(As shared with Swati Ghosh)