The Rise and Fall of a Star!! 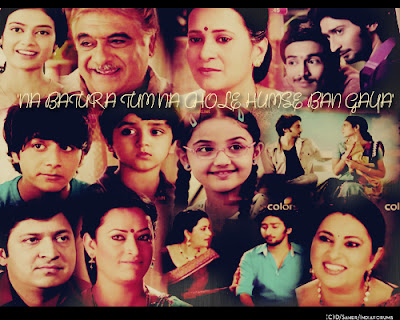 (Disclaimer: Spoof is a humorous imitation of something and is meant to be taken in the spirit it is intended…..humorously with a pinch of salt or tons of sugar if you will or with a plate of Chole and Bhature in this case. This content is unfortunately not owned by Rangmunch, which is nothing but a humble tongue-in-cheek salute to the popularity of the show and is in no way intended to hurt anyone's feelings. Read on, roll on with laughter and move on with a smile on your face.)

JS - "As per the latest buzz, there is someone in the NBT team who is extremely upset with the way things have happened with her. We are talking about Ms. Rumaali, the hanky who plays an important role in the popular show ‘Na Bathure Tum Na Chole Humse Bana gaya’.

R - "I am very very upset with the PH. When I signed the contract, they clearly told me that I will be playing the parallel lead in the story. I had more eye-lock scenes with monu than the other lead meenu. They even used to play the de-re na ,de-re-na BG while he stared at me and smiled happily.

He wouldn’t even share me with Meenu. I still remember how much he panicked when Meenu took me from him to wipe her tears. It was very clear he could never part with me even for that lady! 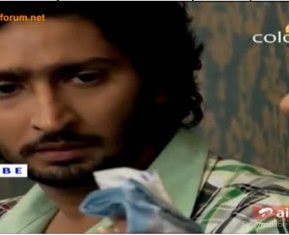 Now just see what they have done to my character! Pehle mere monu ko shoot  kiya. Phir uss ‘am so confused’ wali Meenu se mujhe uska pocket se nikaala. And voila! She remembered how I ended up with ma darling? How could she have those flashbacks when she never missed me? And then she drenched me in monu’s ketchup wala khoon ! Not even surf excel can clean me now! I can’t help but blame the script writer for this." 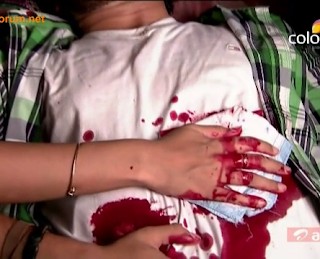 JS - "But Miss Rumaali, how can u blame the script writer? They wanted to show a beautiful sequence where Monu's blood would end up on Meenu's fore head while they play some random shlokas. See they wanted to show a symbolic representation of how Meenu has filled her maang with Monu's khoon.”

R- "Oh really?? In that case, am fully covered with Monu's blood. Kindly tell me the symbolism for that? Does that make me his patni too?”

JS - “Rumaaliji, from what we have seen, monu loves Meenu a lot. The fans too are happy that finally Meenu has confessed her love for him”

R- "Oh so u think only MM have fans? I too have my share of fans! (bursts into tears) I want my old script writer Miss.Cynic back! She was soo good to me! She made Monu look into ma eyes..err lil blue flowers with his theekhi theekhi nazrein and smile many a times. She always made Guru keep me in Monu's pocket so that he could take me out slowly and gaze at me lovingly and go all dreamy eyed.. 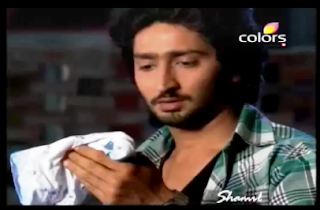 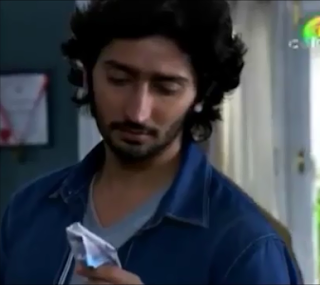 JS - ‘Is it true that you had been throwing tantrums at the sets? There have been rumours that you refused to go wet in a much needed scene.”

R - “oh that’s so untrue! In fact I consider the scene with monu where we drench in rain, the most romantic scene between us! Why would I refuse to do such a scene??” 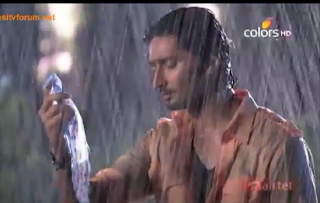 But after that scene, they left me hanging outside the window and I protested against that! I think that made the new writer vengeful and he decided to reduce my role in the show. And here I am looking so yucky under a random book and singing ‘Monu teri rumaali maili ho gayee’ * cries aloud*

JS - "Rumaali ji , I think Monu no longer misses u! They showed him take the deepest breath ever and utter 'mehhghaaahhhaaa..' while he was in the hospital." 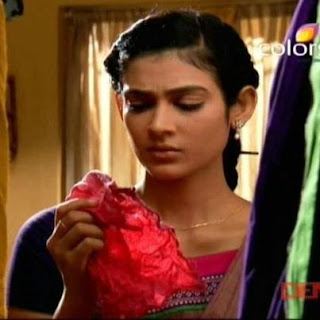 R - "oh, blame it on the poor editing please. I am sure he must have said "mehghaahaa mera rumaal vaapas do' (sighs). Now that am locked up in this cupboard, I don’t even know what’s happening in my show!”

JS- “Oh we have a new entry Maddy who is planning to be the daddy to meenu’s kids. Monu meanwhile has agreed to get married to another random girl but looks like he is back to wooing meenu and her kids."

R- “aww my poor Monu! He is so shattered after losing me that he decided to marry any random girl! I miss him soo much! Does he still search for me in his pocket?”

JS- “I don’t think so. At present he keeps a mangalsutra in it so that he can tie it around meenu’s neck as soon as she says yes.”

R- "Oh, that means they have already decided to end my track in the show! Beraham, bedardi writers!! Just wait n see. The TRP of this show is gonna rise again only if they decide to bring me back to the show!"

JS- “So would you like to say something to your fans?”

R- “I hope they will do the needful to get back my khoyi hui izzat. Till then they can watch this VM and keep signing petitions to bring me back!”