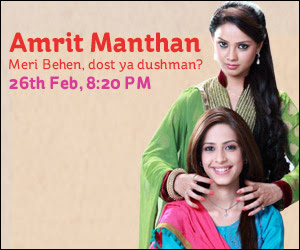 Dramatic elements are going to be infused by the makers of ‘Amrit Manthan’ on Life OK in a filmi style. This will be seen in upcoming episodes and is done with an intention of drawing viewership.

The upcoming track of this show seems to have got some inspiration from Shor, a Manoj Kumar film, wherein the hero takes part in a cycling competition for the purpose of earning some bucks.

In this show too, Navin Bangu, who plays the role of Agam has taken the decision of participating in a cycling competition because he is in need of money for setting up his Dhaba.

After participating, he will cycle 3 days non-stop. Dimple Jhangiani, who plays the role of his wife, Nimrit, supports him throughout. Agam succeeds in winning this competition and these tough times will bring Nimrit and Agam, closer.