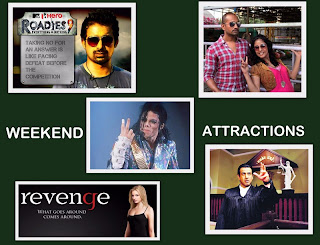 The Roadies receive their passports and visas for America.Excited at finally getting what they had been waiting for since their journey began,they land in San Francisco,where they are welcomed and eventually proceed to their hotel.Being instructed to don their sportswear, they arrive at a dance studio where Rannvijay briefs them on the fitness Pole Dance.

Its been 3 years since the King of Pop ,Micheal Jackson said goodbye to the world and his millions of fans.But who can forget the patented moonwalk,the sparkly black jacket and white socks,the honed pre-break dancing moves ?The concert ,a tribute to MJ,is a two hour special in honour of Micheal Jackson's thirtieth year as a solo entertainer.

A one and half love story that was almost over is revived as the Bindass Dance Squad now plays cupid to Mumbai's Nikhil and Kavita.Lovers for a long time Nikhil was left heartbroken and shocked when Kavita broke up with him claiming to be engaged to a boy of her father's choice.But destiny brings them together once again.

Dinkar Bhau from Daman kidnaps Sarwar Khan's nephew Mazahar from Mumbai,as he is involved in a murder case.KD is in a dilemma but finally decides to go Daman and help Mazahar.

Emily Thorne  returns to Southhampton and rents the seaside home she shared with her father,David Clarke 17 years ago.With the help of her only friend Ashley she sets her sights on her first target and puts her carefully organised plan in motion.