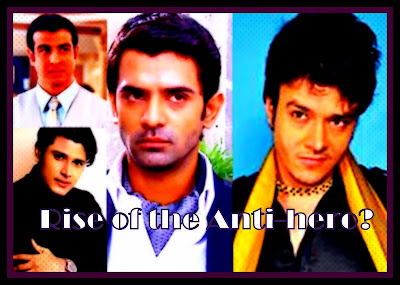 Actors on the small screen, who play it negative, are grabbing quite a lot of attention from viewers, with their immaculate performances, in the recent past. When compared to the goody boys in Indian TV soaps, the bad ones rather surpass in terms of attractiveness as well as through their strong portrayal. A very good example of this would be of Mr. Bajaj, who became much more popular, compared to his better counterpart the good boy, Anurag in “Kasauti...Zindagi Kay”.


Various shows followed suit, with the negative shades hogging the lime-light over the goody two shows. Most shows today often have male protagonists that come with a series of flaws that denote realism in human behavior and attitude.
The popular belief is that women like watching men change and transform over a period of time. And more often than not we have these characters that exhibit traits that one wouldn't expect even out of a hero. The makers also do not hesitate to make their good looking male leads evil as it gives them a wider spectrum to play on.


In recent times, the viewers of small screen have rather shown fondness for people with a less perfect image, thereby leading to the popularity of the small screen anti-heroes of recent times, be it Barun Sobti who plays Arnav in “Iss Pyaar Ko Kya Naam Doon?”, Karnvir Bohra who plays Viraj Dobrialin “Dil Se Di Dua...Saubhagyavati Bhava “, Mrunal Jain who plays Sameer in “Hitler Didi” or Anirudh Dave who plays Indu Singh in “Ruk Jaana Nahin”.