By Rangmunchtv April 11, 2012
Supernatural
Star World,9.pm
It's A Terrible Life

Dean and Sam now lead ordinary lives. Dean works in the corporate world at the Sandover Bridge & Iron Company along with Sam who works as a Tech Support. Both have no idea who the other is until their colleagues start killing themselves.
Quotes
Dean: You broke into their e-mail accounts?
Sam: I used some skills that I happen to have to satisfy my curiosity.
Dean Nice
Raising Hope
Star World,11.30.pm
Meet The Grandparents

Jimmy decides to change his usual Thanksgiving routine by inviting Hope's other grandparents, Dale and Margine, to Thanksgiving dinner. However, he soon realizes that he made a mistake when the grandparents kidnap Hope
Quotes
Jimmy: I've never met Hope's grandparents.
Sabrina: Lucy didn't introduce you during your Storybook Romantic Courtship? Oh, right. You did it in the back of your van & then she was executed.
Jimmy: (sarcastically) Yea, y'know it cheapens it when you say it like that
90210
BIG CBS Love,10.pm 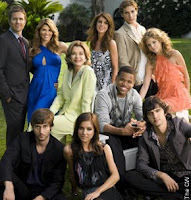 Annie is humiliated that the entire school received her text message and now she is on a mission to reveal Naomi as the sender of the revealing photo.
More updates tomorrow.
90210 big cbs love Khizer Rangmunch.tv RAISING HOPE SEASON 1 Star World India supernatural season 4