Meet The New Veer Of 'Uttaran' 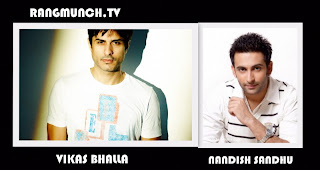 Popular TV Show Uttaran after surprising the audiences with a 18 year leap, has another surprise in store.Telly star Nandish Sandhu who shot to fame with his character as Veer has decided to call it quits with the show making way for actor Vikas Bhalla.
Vikas Bhalla who has been seen off and on  the small screen is now excited to potray the character of Ichcha’s husband Veer  in the show. Confirming the news , the 39 year old actor says”I am looking forward to take up this role and will bring about my interpretation to Veer’s character.”Ask him about his apprehensions about playing a middle aged character,he says ”The best characters on Television today are middle aged men,like it Mr .Bajaj from Kasauti Zindagi Ki,Mihir Virani From Kyuki Saas Bhi Kabhi Bahu Thi or the latest Mr.Ram Kapoor from Bade Achche Lagte Hai.So I am not apprehensive at all”
18th Annual Colors Screen Awards nandish sandhu Rangmunch.tv Uttaran Vikas bhalla