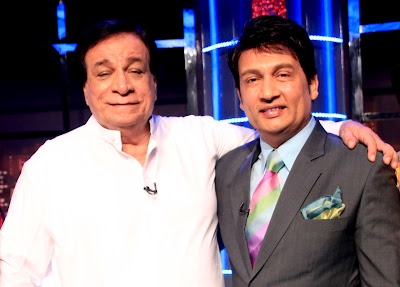 A highly admired Indian film actor, veteran comedian, script and dialogue writer, Kader Khan appears on Movers & Shakers.
Kader Khan, once called the ‘King of Comedies’ has acted in over 300 films, and has remarkably contributed to the bollywood industry and was thrilled to be a part of cult show Movers & Shakers on SAB TV.
Kader Khan said, “I used to watch Movers & Shakers previously and I am a big fan of Shekhar Suman as well. That man has the knack of timely humour which can compel anyone to crackle. Usually, I prefer not to come on the small screen, but it is this show that made me change my mind.”
Kader Khan will leave the audience in splits when he delivered dialogues from his most famous movies. He shared that he would love to work with Shekhar Suman in a film. He shared interesting incidents that happened during his film career and shared that he missed working with Prakash Jha and Manmohan Desai. He was also recognized by the AFMI (American Federation of Muslims from India) for his achievement and service to the Muslim community in India. However, this prolific writer, actor has been forgotten by the film industry.
Kader Khan has huge fan following who, are unaware of his achievements. Movers & Shakers will showcase a unique and fun filled side of Kader Khan that can be treat for his audiences to watch out for!!!
Catch Kader Khan on Movers & Shakers this Thursday at 10.30pm on SAB TV !!
Edited by:
Swati Ghosh
kader khan movers and shakers SAB TV shekhar suman