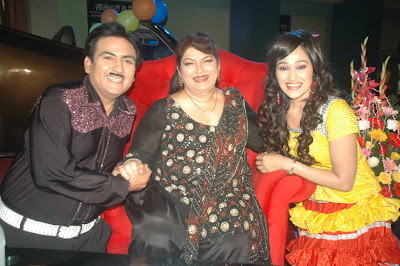 Ace Bollywood choreographer Saroj Khan has come to the sets of Taarak Mehta Ka Ooltah Chasmah to judge the ongoing disco dance competition.
All couples in Gokuldham society i.e. Jetha- Daya, Bhide-Madhavi, Sodhi-Roshan, Haathi- Komal & Iyer-Babita are charged up to participate and win the competition. Every pair has trained hard with a professional choreographer to impress Saroj Khan. Jetha-Daya (Dilip Joshi & Disha Wakhani) will perform on Juli –Juli (Jeete Hain Shaan Se), Bhide-Madhavi will dance on the popular number, Kisi disco mein jaye (Bade Miyan Chote Miyan) and Babita –Iyer will be performing on Dhin Tinak Dhin.
Saroj Khan said that, “I am surprised that all the couples have put in lot of effort and worked really hard for their dance performances. I am not sure who will win the title, may the best dancer win.”
Saroj Khan surprised everyone by declaring a tie between Iyer-Babita and Jetha –daya. There will be a faceoff between Iyer-Babita and Jetha –daya on the song – Aaa Dekhen Zara Kismi Kitna Hai Dum for the winner of the title. But, amongst all these celebrations Daya aka Disha was able to impress the dance maestro with her spontaneous garba act on a disco dance number.
She added that, “I was very impressed when I asked everyone to perform and Disha did an impromptu garba act on a disco number. It was hilarious and entertaining too.”
Catch in next episodes who will win the coveted title? Will it be Daya-Jetha or Babita –Iyer ...keep watching TMKOC to find out who’s the winner?
Watch Taarak Mehta Ka Ooltah Chasmah every Monday-Friday at 8:30 p.m.
Edited by:
Swati Ghosh
disha wakhani SAB TV saroj khan tarak mehta ka ooltah chashma