Amala to make a come back with a Sekhar Kammula's Film? 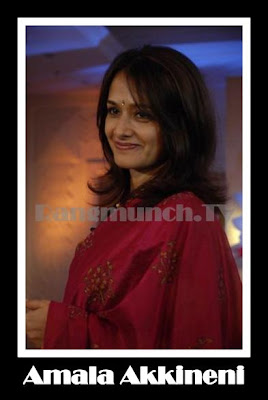 Almost two decades later, Amala Akkineni is all set to make a come back in Telugu Films. She has reportedly agreed to act in a film to be directed by Sekhar Kammula.
Amala, who shot to fame with Siva opposite Nagarjuna Akkineni, married the actor in 1992. She gave up acting after the marriage and settled down as a housewife. She got herself busy with Blue Cross to take care of stray animals. She was also engaged in social service activities. Nagarjuna and Amala have a son Akhil.
After a long gap, Amala has been prevailed upon by Sekhar Kammula to appear in a special role.
Amala seems to have accepted the offer, considering that Sekhar Kammula is known for making clean films like Anand, Godavari, Happy
days and Leader in the recent past.
One wonders what the role is going to be all about. Known for her good looks, and considering Amala as maintained herself pretty well even to this date, it wouldn't be surprising if she is chosen for much younger role when compared to her contemporaries who now play mothers's on screen. Lets wait and watch!
Edited by:
Niharika Vidya Sagar
Amala Akkineni Anand Come back Happy Days Leader Nagarjuna Akkineni Rangmunch.tv Sekhar Kammula Siva