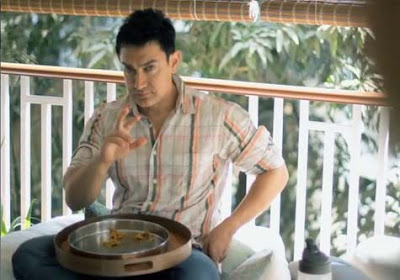 Ace actor Aamir Khan's small screen debut has been creating quite a buzz ever since Star Plus unveiled the first three teasers of the show back to back.
Earlier his show got delayed due to uncertain glitches, and some time back the actor had announced that he would put his flick - ‘Taalash’ on hold and would resume with his dream project on small screen which is now titled as 'Satyameva Jayate.'
Aamir Khan who is known to be "Mr. Perfectionist" in whatever he does, seem to have left no stone unturned to bring out the promos in the most natural and spontaneous manner without giving away the content or the nature of his show. Both the actor and the channel are being extremely discreet about what 'Satyameva  Jayate' is all about.
However when watching each of the teasers, one can understand that it’s definitely going to be unconventional in nature which apart from entertaining the viewers will also manage to touch the deepest chord of human emotions. As Aamir says in one of his teasers, the name of the show should be “Dil Se Dekh Kar Dekho.” The actor also says that people across all age and class should be able to sit together and enjoy the show, only then it can be termed as successful.
After Amitabh Bachchan, Shahrukh Khan, Salman Khan and Sanjay Dutt, its Aamir Khan who has now joined the band wagon. Whether his forthcoming show will take the television industry by storm and create new history on the TRP charts is something that we need to wait and watch, but nonetheless its definitely going to be the most awaited show for now and worth a watch too.
While the content and genre of the show is still under wraps and there are a lot of speculations regarding the same, what do you think 'Satyameva Jayate' is all about? Kindly share your views on the same.
Stay tuned for more updates!
aamir khan amitabh bachchan salman khan sanjay dutt satyameva jayate Shahrukh Khan Star Plus