Prologue
He sat in the dark, next to the pool, the bright moonlight shining down on him.  He was alone, as he always was, even when in the midst of a crowd.  A few moments of peace, a few moments where his thoughts weren’t chasing after each other, that was all he craved, but somehow he could never find that inner serenity.
The gentle tinkle of shifting glass bangles came from the bedroom; he started to turn his head towards the sound but stopped himself at the last moment.  Did her presence in his life not torment him enough without allowing himself to give in to his weakness?  It was hard enough to not fall to his knees and just beg for an end to his misery most of the time, he didn’t need to torture himself by looking at her while she slept, while she looked as innocent as he wanted her to be.
A shuddering sigh escaped him.  The mask he hid behind cracked and fell away as he leaned back in the lounging chair, his face a study in love and hate and despair.  He closed his eyes, trying to force himself to sleep. He had become so used to this nightly torment that it felt normal, though there were times when he remembered the days when the fortress around his heart was strong and undamaged. 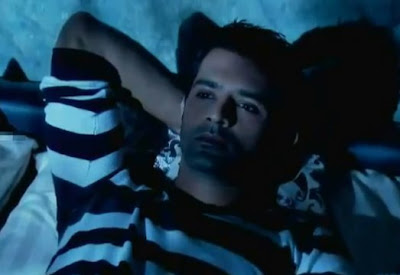 Sleep eluded him for long moments.  Just as he felt himself finally drifting off to sleep, he felt the weight of her head settle into the hollow of his neck.  His eyes jerked open, his hands moving to push her off him; how dare she break the rules he had laid down the day she came into this house.
There was nobody there, no warm body to push away, no silky hair teasing him with its caress.  He turned to look into the bedroom; she lay there with her back to him, her shoulders tense even as she slept.
God, he was going insane.  The past two months of anguish had clearly taken their toll on him.  How could he imagine that she would come anywhere near him, he had told her more than enough times how much he hated her, repeated words of disdain and disrespect over and over in the hope of making himself believe them along with her.  She would never come near him of her own accord, and he told himself he never wanted her to.  And yet, every night, his imagination betrayed him, making him believe again and again that she had breached the distance between them; every night he told himself he would rebuff her if she were truly to approach him, only to have to convince himself over and over that he wasn’t disappointed when it always turned out to be a manifestation of his own innermost desires.
He lay back again, determined to force himself into sleep.  And this time, when he felt the warm weight of her along the length of his body, he let the dream take him away.
“I love you” she said, “as much as you love me”.  Her lips grazed his throat, laying gentle kisses at the angle of his jaw.  “That means I love you more than I imagined anyone could love anything.”  Her kisses trailed towards his lips, enticing him, tempting him, until he gave in and took her lips in a deep kiss, his hands roving her body with possessive fervour.   Passion flared and took over; his last conscious thought was the regret that this dream too would come to an end, the way they always did.
Written by
Fida Raizada
Arnav Arnav and Khushi Fida