Chapter 3
As she escorted her sister downstairs, Khushi felt his eyes follow her, felt the heat of his gaze sear through the thin chiffon of her saree.  She lifted her hand to tuck her hair behind her ear, and saw his gaze follow the bangles on her wrist; though he was far away, she could see his smile as if he heard the tinkle of her bangles.
The next few hours were nothing but a blur, as the reception dragged on and on.  Introductions, smiles, laughter, deflections, questions, answers; at the end of the evening all Khushi was left with were a series of impressions but with only a few real memories.
One thing she would never forget was Arnav’s constant presence near her; no one else would even have noticed that he didn’t leave her side, his hovering was so subtly done, but she was constantly aware of his presence.  She revelled in his presence, determined to make as many memories as possible to sustain her in the years to come; she committed his expressions to memory, the play of emotions in his eyes, his crooked smile, the heat in his eyes as he watched her.  Only once did he touch her, when, with her arms full of gifts, she almost lost her balance and fell.  The feel of his hard hand seared through her, another sense memory to add to her hoard. 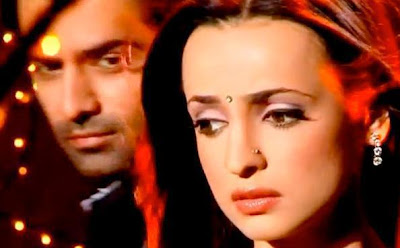 Finally the evening came to an end, and the two families were driven back to the Raizada mansion.  Khushi accompanied Payal to her room and helped her remove what seemed like kilos of gold.  The two sisters chatted quietly for a few moments, discussing the people they had met, and the outfits some of the women had been wearing.
When Akash entered the room, though her sister kept answering her comments, Khushi knew that she was definitely no longer needed.
“Jiji, hum ye sab Mamiji ke paas rakhdenge, tumse hum kal milenge.  Amma Bauji ke saath hum tumse milne aajaenge.  Tum araam karo Jiji, aaj aap bahut thak gayi hogi” “Jiji, I’ll go and give all of these to Mamiji, I’ll see  you tomorrow.  I’ll come with Amma and Bauji to see you then.  You should rest now, you must be exhausted”
As she sidled towards the door, Akash turned his head to look at her
“Khushiji, Bhai ne kaha wo aap logon ko chod denge, bas aap unhe batadena jab aap jaane ko tayyar hain.  Woh poolside pe aap ka intezaar karrahe hain””Khushiji, Bhai said he would drop you all home, he just said to let him know when you’re ready to leave.  He’s waiting for you next to the pool”
She nodded her thanks and crept out of the room, aware that the two people left behind had hardly noticed her departure.
After leaving the jewellery boxes with Mamaji (utterly thankful that she didn’t have to deal with hello-hi bye-bye- Mamiji), she made her way to the main hall, where her parents were sitting with Naniji.
“Arre Titaliya, tayyar ho chalne ke liye?  Payaliya se kal milne aajayenge, magar ab bahut der hochuki hai Nandkishor, humein chalna chahiye” “Arre Butterfly, are you ready to go?  You can see Payal tomorrow, but it’s really late now, we should go”
“Ji Buaji, hum tayyar hain””Yes, Buaji, I’m ready”
“Khushi bitiya, jao, Chote ko bulalo; woh khud tumhein chodna chahrahe the””Khushi sweetheart, go and call Chote; he’s going to drop you home himself”
There was a smirk on Naniji’s face as she spoke; as Khushi left the room, she smiled at Anjali then said “Aap logon se kuch zaroori baatein karni hain, ek do din baad hum aap ke ghar aayenge, phir baat cheet ho payegi” “I have something important I need to talk to you all about, I’ll come to see you in a few days, then we’ll be able to have a serious conversation”
Garima and Madhumati shared confused glances, whilst Shashi nodded “Jaise aap chahein, Samdhanji, par hum kuch samjhe nahin.  Koi chinta ki baat to nahin hai?” Madhumati said. “As you wish, sister-in-law, but I don’t understand.  I don’t need to worry, do I?2
Naniji laughed.
“Arre nahin nahin, Madhumatiji, chinta ki koi baat nahin.  Bas aapke paas ek cheez hai jo humein chahiye hai, to woh maangne aayenge.  Aap pareshan na hon, main jaanti hoon aap woh cheez humein khushi khushi saunp dengi” “Oh no no, Madhumatiji, there’s nothing to be worried about.  There’s just something you have that we want, so I’m going to come and ask you for it.  Don’t worry, I know you’ll be more than happy to hand that thing over to us”
As the two women looked at each other in confusion, Naniji met Shashi’s eyes and saw the understanding there.  She nodded at him, receiving a nod in return.  He may not have been able to say anything, but Khushi’s father wasn’t blind; he had seen the growing glow in Khushi’s eyes, seen the way she blushed whenever Arnav’s name was mentioned.  Though his heart was full of fear at what might happen if the truth about that snake Shyam ever came out, he couldn’t help but hope that things might go well for once.  Just a little piece of happiness, that was all he wanted for his little girl.  Surely that wasn’t too much to ask for.
Unaware of what was running in the minds of the elders of their families, Khushi made her way to the poolside, her heart pounding.  The last time she had stood next to that cool water, she had asked him why he had bought her those bangles.  He hadn’t answered her then, and she didn’t think he ever would, but the thought of being alone with him again sent a rush of pleasure through her.  He wouldn’t ever say the words, but he had claimed her, and she was happy with that.
The poolside was dark, the only light cast by the blinking lights in the “Payal-weds-Akash” sign which Anjaliji had put up a few days ago.
She heard a step and turned; it hadn’t sounded like his footstep.
It was Shyam.
“Khushiji, aap ko humare Saale sahab ki di hui chudiyaan itni pasand aayeen hain ke aap unhe utaarne ka naam hi nahin lerahi hain, magar humari di hui angoothi aap ne phenk di thi.  Yeh kaisa insaaf hai.  Hum to aap se shaadi karne chahte hain, woh to shaadi ke naam pe thookte hain”
“Khushiji, you like the bangles my brother-in-law gave you so much that you can’t bear to take them off, but you threw the ring I gave you away with no hesitation.  That’s hardly fair.  I want to marry you, he doesn’t even believe in marriage”
“Aap humse baat mat kijiye.  Aap ko sharam nahin aati.  Aap ki patni hai, aap ki shaadi ho chuki hai.  Aap humse shaadi kerne ke baare mein soch bhi kaise sakte hain”
“Don’t talk to me.  Aren’t you ashamed.  You have a wife, you’re married.  How can you even think about marrying me?” 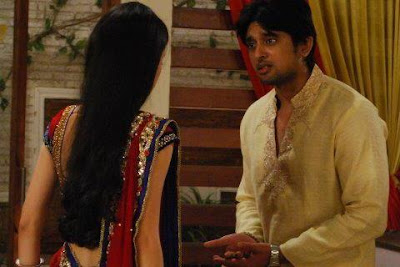 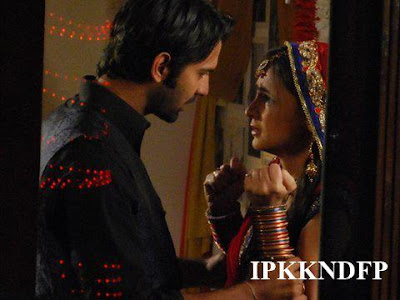