Showing posts from February, 2012
Show all

Chapter 3 As she escorted her sister downstairs, Khushi felt his eyes follow her, felt the heat of his gaze sear through the thin chiffon of her saree.  She lifted her hand to tuck her hair behind her ear, and saw his gaze follow the bangles on her wrist; though he was far away, she could see his smile as if he heard the tinkle of her bangles. The next few hours were nothing but a blur, as the reception dragged on and on.  Introductions, smiles, laughter, deflections, questions, answers; at the end of the evening all Khushi was left with were a series of impressions but with only a few real memories. One thing she would never forget was Arnav’s constant presence near her; no one else would even have noticed that he didn’t leave her side, his hovering was so subtly done, but she was constantly aware of his presence.  She revelled in his presence, determined to make as many memories as possible to sustain her in the years to come; she committed his expressions to memory, the play of
11 comments
Read more 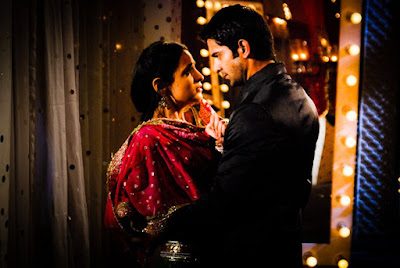 Chapter 2 As Khushi bade Nani farewell, her smile hid a thousand hurts and shattered dreams.  Sometimes it seemed that she couldn’t remember what it was like to breathe without pain shuddering through her with every breath; there were times when all she wanted to do was scream till her throat was raw, scream at her husband for destroying her over and over and over again.  It would have been kinder to kill her than the daily torment he put her through, but she knew that he hadn’t wanted to be kind, knew that Arnav Singh Raizada was capable of the utmost cruelty when he believed someone worthy of punishment. He had turned their lives into a punishment and ensured her existence had turned to torment, reminding her with every breath of how unforgiving he could be.  The love she had once seen in his eyes had turned to hate the moment he realised she had lied to him, and for that she couldn’t blame him.  She hated him with every fibre of her being, mostly for being so unbending and unfor
3 comments
Read more

Chapter 1 He sat at the dining table, drinking the fresh orange juice, which was the only breakfast he had been able to stomach in the last two months.  Sitting next to him, Nani carried on an animated conversation with his wife, discussing everything and nothing.  He wondered whether he was the only one who could see through Khushi’s mask, see that her eyes were dead.  It certainly seemed to be the case, but then maybe he was the only one who knew what he was looking for.  He knew exactly what someone’s eyes looked like when they were dead inside; after all, it was that dead look which stared back at him whenever he saw his reflection in the mirror. There was a lull in the conversation, giving him a chance to break in. “Khushi, is Di not coming down for breakfast?” he asked, his voice as neutral as he could make it. “Bas aarahi hongi, Jijaji ka phone aaya tha.” “She’s just on the phone to Jijaji, she’ll be right down” She replied, her lilting voice a parody of the way she had
4 comments
Read more

Prologue He sat in the dark, next to the pool, the bright moonlight shining down on him.  He was alone, as he always was, even when in the midst of a crowd.  A few moments of peace, a few moments where his thoughts weren’t chasing after each other, that was all he craved, but somehow he could never find that inner serenity. The gentle tinkle of shifting glass bangles came from the bedroom; he started to turn his head towards the sound but stopped himself at the last moment.  Did her presence in his life not torment him enough without allowing himself to give in to his weakness?  It was hard enough to not fall to his knees and just beg for an end to his misery most of the time, he didn’t need to torture himself by looking at her while she slept, while she looked as innocent as he wanted her to be. A shuddering sigh escaped him.  The mask he hid behind cracked and fell away as he leaned back in the lounging chair, his face a study in love and hate and despair.  He closed his eyes,
6 comments
Read more
More posts