Where Mummy never outgrows her Baby!!! 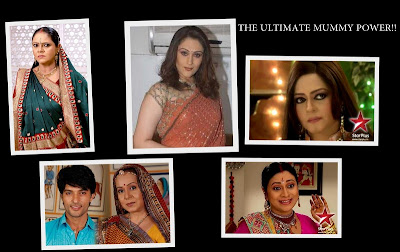 No one loves a child like a mother does! This is a fact that is known and accepted all over the world. A mother is the giver at most times. She teaches, she guides and she watches her child grow and learn! But what happens when that very mother is told to share her love with another equally important person in her child's life? Is it easy for the mother? How does a mother then deal with it?
Going by the latest set of shows that are airing on TV currently, the hot favorite seems to be the age old Saas vs Bahu drama presented with a rose tinted glass! Gone are the days when mothers are shown out right evil. Today, the lead protagonist in a show is most often the mother who has a unbreakable grip over a child, so much so that she doesn't appear wrong, but is not totally right either! Lets take a look at some over powering Mothers on TV.

Kokila (Saath Nibhaana Saathiya): When she was first introduced on the show, her very appearance scared the wits out of the audience. Many quickly even stereotyped her as the mean Saas who would leave no stone unturned to torture her daughter-in-law! Time however proved this belief wrong, and people loved the fact that Koki Maaji, was the Gopi's strong support in the Modi household. That never ceased to exist. All of this, only because she knew how important she was in her son Ahem's life! Things today however are changing, what with Kokila slowly realizing how Ahem is slowly but steadily tilting towards Gopi, showing signs of independence and wanting to take his relationship with his wife forward. Ideally, the mother should be happy, since she has always sided her virtuous daughter-in-law! This however is not the case. Kokila slowly feels the pinch of losing her hold over her son, and over a period of time, one will have to wait and watch how this saas  handles the husband in him! Tough road ahead!

Badi Ma-Swamini (Ek Hazaro Main Meri Behna Hai): Swamini walks into the frame and you know no one else gets to call the shots when she is around. No one does as well, and hence all is well in their paradise, until a certain Manvi enters their lives, grabbing unwanted attention unknowingly! Swamini hates this. She hates the disorder that has crept into their disciplined life! She makes no bones about hiding the fact as well.
However recently, one did see a phase on the show, where she though doesn't tell Viren she is feeling insecure, she does make her displeasure clear when she tells him his priorities have changed and that he doesn't regard her important any longer. This puts Viren in a fix especially since he is very attached to his Badi Ma. Viren has been closer to his Badi Ma than he has been with his own mom. In fact one also knows, this is the case because Swamini has made it that way! Thank god for an understanding yogya bahu Jeevika, who readily send her husband back to woe his mother figure, and Manvi does her share too! The coffee moment between the mother and the son, could give any romantic moment on the show, an equal run for money!! Mummy Returns and How!!!

Bhabho- Diya aur Baati Hum: "I will get the best bride for my son only because he is better than the best! His wife will forever be subservient to me, and my son will only be a part of her life to take generations forward!" And then she learns her dear daughter-in-law is not a 7th pass but a degree rank holder. Nothing wrong, but her faith shaken. More so because her son confesses having known the fact right from the start. This mother plays it smooth. She appears unaffected, turns extra sweet, and puts her son in a tight spot in return. No amount of begging or pleading yields returns and she makes it loud and clear. Her son has betrayed her and she will not forgive them! At times you wonder, wasnt the mean nasty saas better off? You could alteast hate her with all your heart! Along with the son, you also don't know if at all, how wrong is she?

Niharika ( Bade Acche Lagte Hai): I hate her for sharing my name, but I think she is actually a little easier to loathe, since she is mean and evil, and she loves being that. The grip she has over Ram is for the world to see and she uses that also to further her personal gains all the time!!!That fact that she is sweet on the face and manipulative behind his back actually makes you feel for Ram, and you wait for that time when the truth will be out, though one doubts the possibility of the same! 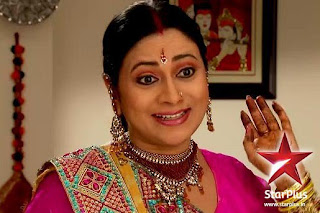 Manorama Mami ( Is Pyar ko Kya Naam Doon): During most times she is politically incorrect. She has an inferiority complex and hence wants the best bahu for her son. She loves him so much, that she feels only money, power and wealth can give him happiness. She may be wrong, but she does all of that only out of her love. Today she has agreed to let Payal become her bahu, but she time and again taunts her, and her family's financial status and makes it clear that she is not welcome in her sons life! Though people around her end up convincing her to give into her sons happiness, this mother and her attitude towards her daughter-in-law to be cant be ignored for sure.
Hail Mummy Power! Seems like a sure shot hit formula that's working for all these shows that have sky rocketing TRP's ! Until next time then ...
Niharika Vidya Sagar
Rangmunch.TV
Bade Acche Lagte hai Diya aur baati hum Ek Hazaro Main Meri Behna Hai Niharika Vidya Sagar Rangmunch Saath Nibhana Saathiya Sony Entertainment TV Star Plus Whre Mummy never out grows her baby