By Rangmunchtv January 13, 2012
She is that mirror through which you see your own reflection. She is the only one who will hold you when you fall. She smiles at your little accomplishments and she shuns you at the very sign of danger. You love fighting with her, because she is that force you love to overcome, but never want to win over. Such is the bond a mother and a daughter share. World over, Mothers and Daughters may share different relationship patterns, but the underlying love, the connect and the thread remains the same.

I have selfish reasons why, I want this article to go up today. Its my own Mother's birthday! So here's the tale of a mother-daughter, we met a couple of days ago and totally loved. 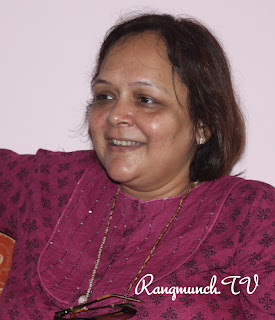 Swapna Waghmere Joshi is an accomplished Director in the Television and Movie Industry. Many people instantly take to her warmth and affection, the moment they meet her. When we met her for the first time for an interview, the rapport she and her daughter Sanhita share stuck with us, and we wanted the world to see the same.
Swapnaji: "Sanhita is extremely understanding. I have seen other kids and how tough it is for parents to deal with certain situations, and being a single mother, it is even tougher. When both the parents are around, Discipline is maintained and the child also knows that. In my case, she is extremely understanding. Agar usko baitha kar kuch samjhao gey, toh samajh jayegi. Sometimes without even telling her she would know that mamma you are very tired, you need to sleep.


Just the other day she insisted I must watch a movie since I had not seen one for sometime, she said, “mamma aap jao Desi boys jaake dekh aao, adults ki hai, apne friends ke saath dekh naa.” Generally I go with her to watch a film, but there are instances where without saying she would know what to do. At times she even asks me weird questions like when am I going to find a Boyfriend for myself (laughing at her innocence)." 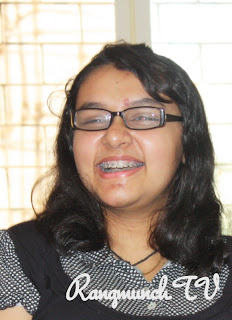 Sanhita who totally adores her mother, has only nice things to say about her. So when we ask her what she thinks of her mother, here is what she had to say. “She  is very understanding and more than a mom she is my friend. She is also very peaceful.”
Swapnaji makes it very clear to us that since her daughter wants to take up Arts as a subject, she has told her to get only 70% and not to go above that. She is extremely upset with the current education system. "The marks only reflect what you want to be and has nothing to do with education". Ultimately it’s just literacy. And what will she do with 90% marks if she doesn't put them to use anyway jokes Swapnaji. This mother is completely okay with whatever her daughter wants to be in life unlike most parents, who always wish their children would academically score cent percent marks. ""But she has to be the best in whatever field she ultimately chooses be it a Chef or a Costume Designer."

However if Sanhita decides to step into her shoes, Swapna ji’s words of wisdom to her darling daughter would be “get another degree so you have the confidence to do something different if at all things don’t work out. More than talent, it’s the luck factor which counts- to be at the right time and  right place is vey important. That’s why you should have a back up plan if things don’t work here.” 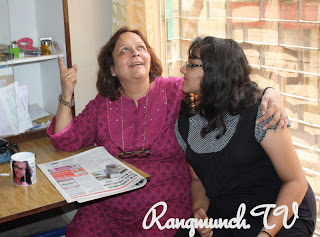 It comes as no surprise that Sanhita wants to assist her mother when she gets her 3 months break before starting her 10th standard. However Swapna ji unlike any other protective mother, wants Sanhita to go through her share of struggle before she tastes the joy of success. “I have told her that working with me and my team is not a good idea, as you will get special treatment for being my daughter. I'd rather send her to my friends like Nandita Mehra or Sangeita Rao, where she will have to come before the Director enters the set and leave after him/her. Swapna ji in fact is also okay with the share of “Gallis”  that would come as a part of that job requirement from the Director. That’s the only way she will learn,  by being like any other person.”
All of us know how hectic the life of a Maker is in the Television industry. So does Swapnaji get time to do things she likes at all? “I like singing, dancing, doing drama and reading. My read is basically thrillers. Being a candy floss Director, I have to watch the thrillers with my daughter, imagine,” says Swapna ji with a shiver. “We share absolutely everthing under the sun. Even when she wants to know the meaning of an abuse, I make her sit and explain what it means to her. So there is nothing that she doesn’t know and vice-versa.The only thing that is not acceptable to me, is being rude to the elders and she thankfully has never misbehaved that way!


On a day when I am not shooting, we both get up late. She goes for her tuitions and I finish my meetings before she gets back. In the afternoon, I make her read her text book aloud. During evenings, we go for a movie occasionally or sit with my parents who live next door. It’s a fun evening and we play lot of games like UNO, BUSINESS and also KBC. At night we gossip a little while watching Bigg Boss (laughs).My parents are a big support system for me and my daughter. When I have to shoot at night , they come and sleep and that is a boon.” 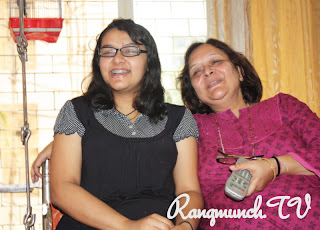 When we ask Sanhita what she likes to do in her idle time she instantly responds saying, “I like to watch Hanna Montana and Shin Chan.”


Swapna ji  breaks the conversation by joining in saying “I hope she doesn’t become like Shin Chan though. At times she calls me Mitsy (Character from Shin Chan Cartoon). I call her Mao (as in cat ). Eversince she was born, we have been calling her Mao and hence have now got her a male cat too.(teasing her daughter)


We ask Sanhita if the criticism related to her mom’s work affects her and that if she is popular among her peers to which she comfortably responds “Earlier I would get get effected by the fact that everyone knew my mom.But now with passing years it doesn't anymore. I also don’t get any special treatment from friends just because my mom is in the Television industry.” 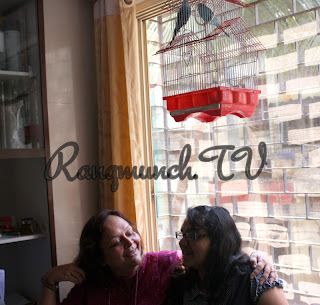 Talking about her daughter’s pets!


Both Swapna ji and her daughter Sanhita are complete pet lovers. Sanhita introduces us to her two love birds called Sin and Soul that she was gifted as a 14th Birthday present. Swapnaji insists we know the history behind the names and Sanhita tells us she picked those names because, Rushali Arora who played the role of Madhvi in Swapnaji's Rang Badalti Odhani, has two Persian cats by the same names and Sanhita absolutely adores them!
Another indispensable part of their household was the little pet we saw quietly  moving around in their home- GINGER, the Cat. 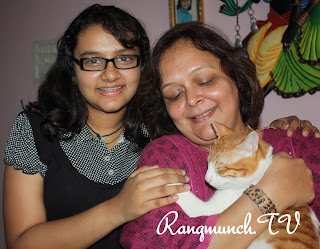 Swapna ji tells us the cat was given the name Ginger by Yashashree Mashurkar of  Rang Badalti Odhani fame. “Ginger came into this world with 2 of his other siblings. Yashashree kept one, Rushali kept the other and Ginger came to us. Ginger has become the sole reason for happiness to Sanhita. She continues the conversation saying “din ki shuruat Ginger se, raat ko sone se pehle Ginger, bahar gao jao toh Ginger ki baateien, hum koi iske liye ab maiyne he nahi rakhtey,” says Swapnaji (smiling lovingly at her daughter).


Even while going for a bath Ginger will obediently follow my daughter to the bathroom. Jaise ki hamare haath mein kante hai aur uske haathon mein phool. Ginger reacts so differently to us.”  The affection and the bond that Sanhita shares with Ginger is so apparent, Swapnaji tells us how her daughter refused to travel with her to Pune recently for two days only because Ginger would be left alone at home. The cat too reciprocated the gesture by willing to let go of his master. We even got a live demonstration of how Ginger instantly takes to Sanhita, and responds to her so nicely! 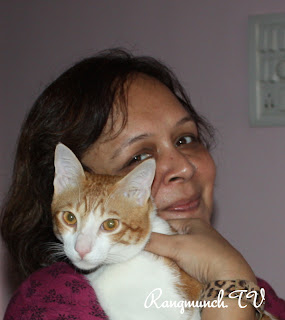 While, the conversation about the cat began, we realized it never switched from there on to anything else, Swapnaji put an end to it telling us how once  she told her daughter “ya toh cat rahega iss ghar mein ya mein rahungi.” And very quietly Sanhita said,“cat ko rakhtey hai” (all laughing away now).


It was endearing to watch the mother-daughter bond over so many things.


On that note, we leave the lovely mother-daughter duo to spend the rest of their holiday together enjoying doing things they like! It was a pleasure meeting them and interacting with them! The upma, achaar and the coffee still give us the feeling of visiting a home you have known for years! We hope you enjoyed reading this little page from Swapna ji's diary with her daughter!