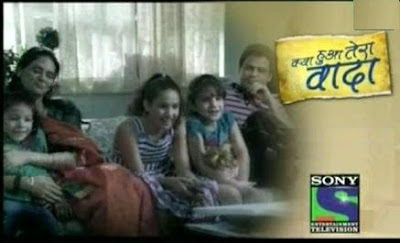 The quality of love and the duration of a relationship are in direct proportion to the depth of the commitment by both people to making the relationship successful. Commit yourself wholeheartedly and unconditionally to the most important people in your life. ~Brian Tracy
Ekta Kapoor is back with a fresh new story of a married couple who are thrown in together to live, survive and save their marriage. Based on a extramarital affair, this show will see Mona Singh of “Jassi Jaisi Koi Nahi" fame making a comeback to the daily soap with “Kya Hua Tera Vaada."

This is  Sony TV’s newest offering, which  will be telecasted on 30th of January as of now. Mona Singh will be seen playing the role of simple house wife opposite actor Pawan  Shankar. It is generally seen that couples, when having achieved more or less everything they ever desired in life, they tend to relax .
The dream of a white picket fence house, well established career, good social circle and most importantly a family they love the most, is fulfilled. Everything is perfect or so we think. The question being when all is perfect and good, where is the crisis? The crisis comes when kids start  to take the place of the husband, the crisis deepens  when husband  gradually begins to come  home late. It is then, when  YOU  as a spouse need to bring  some  monumental changes  in your married life, if you still want to be the ONE  for the other. Be it a simple meal you both enjoy cooking  together, or just a plain meaningless drive to the mall, or even  laughing over a crazy lame joke. These  moments  are the true essence to strengthen the  marital bond .

People often say when there is love and compatibility, why do you need to work on a marriage? But later the same bunch of people  also say that “Wish we had worked a little bit more on our relationship” especially when things start to falter. “The view from the window may look glossy but to see the details of the outside you will need to clean the window frame  time to time." Similarly nothing comes easy in life.  One has to try to reach a point of solidarity by working towards it.
Mona and Pawan are such two people  who  will be essaying  the role of the lead protagonists  who will be shown dealing with some  crucial life altering situations which catches them unaware  making one of them slip away slowly from the bond of marriage. Will the wife realize  the importance  of what she is loosing and balance herself before it’s too late or will he, the husband step back and counter think his momentary steps which could affect his family forever.
Watch this fascinating and mature story of a man and a woman who are woven together for eternity!
Navyanka Varma
Rangmunch.TV
Jassi Jaisi Koi Nahi Kya Hua Tera Wada Mona Singh Navyank Varma Pawan Shankar Rangmunch.tv Senak In Sony Entertainment TV