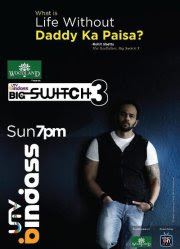 All the money in the world, even if its your baap’s, cannot teach you about value for money and time, humility, charity, manners, and how to work for a living. It takes more than money. Shocked!! Well that’s the reaction of the brats who adorn this show.
Not that people who have loads of moolah are alien to these words. It just gets buried deep within when you have nothing better to do than spend all the money floating around.
Take away the money and its by-products, which are responsible for your shortsightedness, and we get to see a whole new different you. This happens to be the concept and mission of the show BIG SWITCH on UTV Bindaas. Atleast it’s the hope with which the show has been designed. 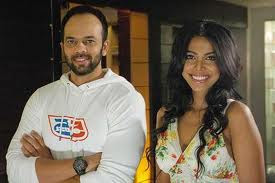 Big Switch is on its third leg this season with 8 uber rich super brats as their contestants with acclaimed director of Golmaal fame, Rohit Shetty playing their God father cracking a whip when required. Well, not literally. Natasha Suri, who has been a contestant in season 1, hosts the show.
Rohit Shetty, the Godfather
Don’t go by his gentle smile tugging at his lips or the twinkle in his eyes when he speaks or quietly threatens with dire consequences. He is as tough as they come. It is unbelievable to see Rohit Shetty being rough and tough in tune with his appearance after seeing him laughing aloud in Comedy Circus or watching the movies he has directed. 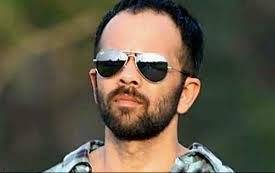 He is here for being a person to have carved a niche for himself on his own right. He has struggled to be where he is right now in the industry unlike the contestants who are yet to find out what it is to stand on their own two legs. Rohit swears that by the end of the season, he will make sure they learn to not only stand but also run their lives on their own steam without depending on their father’s money.
That brings us to the BIG DEMAND
Every contestant is working to get closer to realizing his big wish in the form of a big demand that was made to his or her parents at the start of the season. Every week a challenge is thrown at the contestants in the form of ‘hard work’ that needs to be done for them to get paid. With the money they earn that day, they as a group can decide to buy things that are displayed in a glass chamber, things that they couldn’t do without when they entered the show – I pod, Laptop, Blackberries, Playstations, and even AC.
The super duper Brats learning to be breadwinners!
Money makes the world go round. Well here, we have lack of money doing that as well in a different sense. All they did until now was to spend hard and party harder throughout the day and night. In-between the partying and spending, they slept to their hearts content. Dream vacation anyone? Not anymore on Big switch. Here they get to work hard, and sweat harder and in between all the sweating and working they learn more than few valuable lessons and hard truths about money, time, life and themselves.
Sahil Rohira: 20 years old from Mumbai. He is the only son, pampered to the hilt. Parents want him to learn the value of money and join his father’s business.
Big Demand: 50 lakhs to start his own business
Swapna: 25 years old from Mumbai. Her daily routine includes lunch with friends and shopping. She has no interest in holding a 9 to 5 job. Her parents want her and her sister Neha to know what life and work is all about.
Big Demand: 60 lakhs for bakery course in
Neha: 21 years old from Mumbai. She is the younger sister of Swapna. She is a self-confessed shopaholic whose day starts at 7pm. She own 365 pairs of shoes. She is looking forward to the day when she can live her life alone the way she wants to in .
Big Demand: 60 lakhs for fashion designing course in
Faizan Mir: 20 years old from . He considers himself cool enough to confess his weakness to be girls. His day starts at 3pm. He is extremely short tempered and is yet to figure out what he wants out of life. His parents want him to learn the value of money, to work and earn, and most importantly to behave.
Big Demand: Blank Cheque (smart!!)
Anjusha Bhattacharya: 20 years old from Mumbai
Her shopping days are fixed through the week: Thursday, Friday, and Saturday and her day does not start until 10 in the night. Her parents describe her as a problematic child who is arrogant. They would love her to learn the value of money and time.
Big Demand: 50 lakhs for a trip around the world
Sushant: 21 years from Mumbai. His routine includes pampering himself at parlours. He is a shopaholic and he cannot do without a mirror. He prefers to do yoga on a beach. His father hopes that he learns how to live without being dependant on him financially.
Big Demand: 18 lakhs for a chauffer-driven, pink beetle car
Rohit Bajaj: 23 years old from . His day starts at sundown. He is lazy, a party animal, short tempered, and mama’s boy. He is prone to beat up people at slightest instigation. He loves bikes. His mother wants him to learn to value relationships and learn the value of money.
Big Demand: 80 lakhs for a Hummer
Heena (Twinkle): 21 years old from Ahmedabad. First thing you notice about her is her attitude. She wears it on her sleeve. She loves to party and does not think twice before running up a bill of 55,000 in a matter of hours and is quite unapologetic about it. Her parents want her to learn the value of money.
Big Demand: 18 lakhs for a motor bike
Watch out for some serious lessons on life being learnt by these super brats every Sunday @ 7pm on UTV Bindaas. Trust me, you wouldn’t want to miss it. You never know, you may end up learning a few lessons of your own.
Neeraja Unni
Rangmunch.tv
Big Switch Natasha Suri Neeraja Unni Rohit Shetty UTV Bindaas