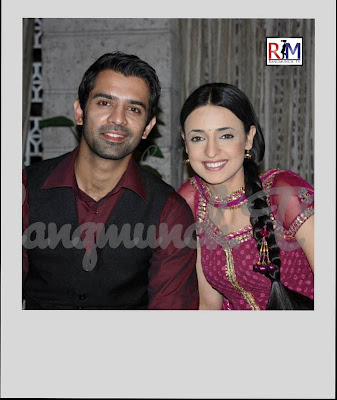 Rangmunch: Does expecting the unexpected make the unexpected the expected?
Barun: Just don’t EXPECT any answers (Laughs).
Rangmunch: If you were to turn into an anonymous person for a week, what would you do and where would you go?
Barun: I know her answer (looking at Sanaya) she would go to the Bigg Boss house and be with Pooja Mishra.
Sanaya: Oh pleeeeaaaseee…(then a pause and says), Pooja Mishra you rock. She would rock my world over a…..
Rangmunch: She’s out of the house now..
Barun: Oh crap!! The wait is over (in splits now).
Rangmunch: Would you break the law if you were in a hurry to get somewhere?
Sanaya: Yes, depending on how intense the situation is.
Barun: (in a dramatic way) very moralistic girl she is .. (then on serious note) No, anyone would if they had to get somewhere really important.
Rangmunch: If we learn from our mistake, then why do we fear making them?
Barun: I don’t fear  making mistakes, I have fun.
Sanaya: I don’t make a lot.
Barun: so she claims (smiles cheekily)
Rangmunch: Would you allow a woman to drive the car while you sit next to her.
Barun: Ya, all the time.
Rangmunch: Sanaya would you allow your man to cook though you cook yourself?
Sanaya: Oh yaa…ABSOLUTELY!! (happily says) That my Ideal man. My dream is to marry a cook and have an affair with a Masseuse.


Rangmunch: How would you wriggle out of a situation when someone tries to emotionally blackmail you?
Barun: (authoritatively says) Just deny it! if you accept it once, you will get stuck for the rest of your life. (Looking at Sanaya) this is what she does to me all the time, "Barun tu mere liye itna nahi karega?”
Sanaya: (laughs and puts her head down) I do.
Rangmunch: Do you love to travel by plane or trains?
Barun: I love trains , but don’t have so much time.
Sanaya: Plane.
Rangmunch: Tell us about your class teacher in Grade 1?
Sanaya: Ouch! I don’t remember and (looking at Barun), he doesn’t either.
Rangmunch: Tell us about your first pencil box and school bag ?
Barun: I had many.
Sanaya: (says sarcastically) ya, he would loose it everyday and come for  another one. Was it you (looking at him)…oh ya, we know each for a looong time now.
Rangmunch: If you had to describe each other in a word or sentence, what would that be?
Barun: Well you have to be here, share the joys and sorrows (says sarcastically)…No she is a wonderful person. And since I have to go back and shoot with her, might as well keep quiet.
Sanaya: He is fun!
Rangmunch: Do you cry at movies?
Sanaya: I cry every time.
Barun: She cries even when she sees the show  man(waves his hand through the air)
Rangmunch: Which is your favourite scene?
Barun /Sanaya: Too many. I cant remember.
Rangmunch: One scene where you got carried away?
Sanaya: I loved the scene where I had to push Barun, coz yelling is so me, but physically pushing him was fun .
Barun: Oh ya...I enjoyed that too. She didn’t have to act. NATURAL !!
Rangmunch: On a scale of 1-10 , how happy are you?
Sanaya: Barun is probably 9, 9.5..
Barun: I am very happy, its only when you don’t know about the future, that bothers you, your work and all.
Rangmunch: One advice Barun would like to give Arnav?


Barun: Take it easy boss.
Rangmunch: One advice Sanaya would like to give Khushi?


Sanaya: Calm down
Rangmunch: What do you think binds Arnav and Khushi together?
Sanaya / Barun: (both say together) The Script!!