18th Annual Colors Screen Awards 2012 will be aired on 22nd January at 8:00pm only on Colors Channel.
This is the only jury based award in the industry and hence is considered very prestigious.
It will be a dual treat for the viewers to watch Dabang Salman Khan and Shahrukh Badshah Khan share the same stage.
Besides the two Khan’s, the award function will also be graced by the melodious Asha Bhosle, the Bollywood Diva Katrina Kaif, Ohh la la Vidya Balan, the evergreen Rekha, gorgeous Madhuri Dixit, sizzling Priyanka Chopra and Anushka Sharma, Shahid Kapoor and sensuous Chitrangada Singh.
So don’t forget to tune into Colors, to enjoy a star-studded night and watch your favourite actors get rewarded for their best work on the Silver Screen.


This weekend watch Ronit Roy aka KD Pathak fight against the malpractices in our society. KD will tackle the case of honor killing that is still prevalent in India, wherein innocent people are killed by the community or the family members in the name of preserving their family honor.

Do tune into Sony Entertainment television on 21st January at 8:00pm to watch KD Pathak solve yet another case with his wit and due diligence. 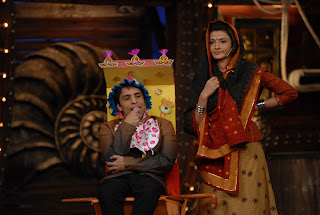 Kahani Comedy Circus Ki is all set with another amusing episode!
Theme for tonight will be ‘First and last experience.’ Watch Kapil playing a politician and Sumona as a reporter. Krushna will be playing the character of a nurse and his partner Sudesh will be portraying Krushna’s father’s role. They will surely topple you from your seat by their excellent chemistry and wit!
To double the dose of laughter, Bharti and Siddharth will come on the stage as themselves. Rajiv will be seen projecting his life’s journey and Suhasi will be playing various characters.
Watch out for star performers Rashmi who will be seen as ‘nautanki wali’ and Kuldeep will tickle your funny bone as ‘kavi.’
So catch all this fun and masti only on the special episode of Kahani Comedy Circus Ki on Sunday 22nd January at 9:00pm on Sony Entertainment Television.
Rangmunch wishes all its viewers a very happy weekend!