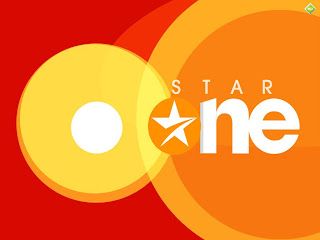 I remember when Star One was launched sometime in 2004. I was very new to the TV industry then and was completely in love with the channel- its tagline was Apni Tuning Jamegi and it had this complete fun feel to it, the promos, the packaging- it was like a wafer, crisp, fresh, you couldnt just have ONE! Sarabhai, Instant Khichdi, Remix, Guns n Roses, Pyar Ki kashti, Hotel Kingston (you may think I'm googling the names but the truth is I remember because I was awestruck that TV can be THIS too!!) And I secretly wished to be a part of Star One someday.
And somehow I think God hears the whispers that you send to your own heart as well. A few years later, Vivek Bahl offered me to write for Deeya Singh's Annu Ki Ho Gayi Wah Bhai Wah. And I was thrilled!! I did a few initial episodes of that but I couldnt continue due to some reasons. Then I got a call for another show called Seema Sudhir Sharma's Chhotey Chhotey Sheher Bade Bade Sapney about two diamterically opposite sisters from a small town who come to a posh college in the metro. This show, no Santa Claus goodies for guessing, was Miley Jab Hum Tum!

We went on air on September 22, 2008 (I hope I am right else the fans will kill me; and if I am right please dont think I am like Subodh from Dil Chahta Hai!) and again I was super happy to write a youth show, something I always wished to write when I saw Hip Hip Hurray as a kid. I still remember Mayank, Nupur, Samrat, Gunjan, Uday, Diya, Benjy, CJ, Vatsala, Annie, Chacko, Chinu, their Valentine Days, their pentathalons, the trip to Morena, Samrat realizing he is in love with Gunjan (which by the way happened almost a year after the show aired), how fans would keep comparing 'Mayur' with 'Sajan' and the whole complaints about these people got so many minutes of scenes more and they got so many seconds less in the song! LOL! That sheer madness!
I miss MJHT- when I hear Khuda Jaane, I remember Sam-Gunjan, when I hear Ishq hua, I remember the one shot song in the foyer, when I hear Pehli baar mohabbat, I remember Mayank and Nupur's passion. And when I hear Salaam E Ishq, I remember the crazy episode we wrote with Dill Mill Gaye and MJHT combined writers sitting in a room with Nikita Dhond, Rohini Singh, Anand Jain, Richa Yamini, Jyoti Tandon, Neeraj Sachdeva having Maggi noodles for hours together! I remember crying when the season one finale happened and the foursome met with an accident. Now there is sure a million fans who would wonder why we did that ever but lets not go there. ;-)
And of course, I made my acting debut with the show. Nissar Parvej directed me as Chironji who came in Mayank and Nupur's track, so yeah, Star One marked my debut as an actor as well! And then Chironji came back. I remember story writer Anand Sivkumaran's sms to me- "Time to don the greasepaint again dude, Chironji return!" I bonded very well with Arjun and Rati.

Then there was Love Ne Milaa Di Jodi. Three brothers, three sisters, a romantic thriller. Now that was another fun show primarily because everyone on that show was so much fun to work with. Our first schedule to Panchgani, the boys and girls pulling each other's legs in the make up room, there was laughter always on the set. The creative team was also very sorted on the show.
But then the sur of the show was made a bit soapy/drama because the channel was venturing with their next shows (Odhni and Geet) into a soapy/drama zone. When the show came to a closure also, it was sadder because we all bonded so much as a team-Pushkar Karmalkar, Sancheeta Bose, Jyoti Tandon, Jay Verma, Aparajita Saha, Shilpa D'mello, Radhika Borkar, Gaurav Khanna, Karan Tacker, Dishank Arora, Chandana Sharma, Simran Aur, Perneet Chauhan. Gladly, we all still catch up, we are on Facebook/ Blackberry/ and if nothing, just a phone call or a party invite away from each other.

I was briefly also a part of Dill Mill Gaye where I played Doogie who falls for Dr Ridheema whom I called Sweety beauty baby. I thought, whoa! Working with Karan Singh Grover THE STAR! But he was just so sweet! He and the Director Anirudh Rajderkar were very supportive of me. Being essentially a writer, I would change my lines as per what came to my head and not stick to the dialogue per se but they never complained and this applied to MJHT also. I remember I would just improvise something, like this one time when the script had me ask Nupur Mayank chala gaya? and I asked her Mayank chal basaa? and Rati was in splits and the Director had to call for a cut but we retained that and it just seemed funnier.
So thats what I gather, the channel was what I thought it was- FUN. It gave me a chance to work on projects I wanted to have on my CV (romantic comedies), it gave me friends (most of the cast members of LNMDJ, MJHT, writers, creatives) it gave me a chance to work with reputed Production Houses and I earned a lot of experience and made money for my first big house. Yes, us ghar ki eenth eenth mein MJHT aur LNMDJ basey hai, LOL!

Presently the shows that I'm writing are for Star Plus but the last prjoect I did for Star One was Geet, when they wanted a cameo writer for a track when Geet goes to her maasi's place- it was like a new set up and involved romance and comedy. Once that was done, I had to leave.
Today the channel's phased out and we wont get to see the ONE logo any more, but what matters is that somewhere it is still framed in our hearts, like the cupid in the end page of Love Ne Mila Di Jodi, like the whistle theme of Miley Jab Hum Tum, like the Ishq leta hai song from Dill Mill Gayye, like Maaheee from Geet. Its something we wont remember, because yaad toh tab aayega na jab bhool jayenge! :-)