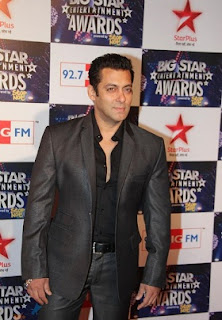 The Big Star Entertainment Awards 2011:
Get ready to witness this year’s biggest New Year party, the BIG STAR Entertainment Awards 2011 on STAR Plus. The BIG STAR Entertainment Awards 2011 will recognize ’s best talent from Bollywood, Television, Sports, Music and Dance. The event will be hosted by two known faces of silver screen - Shreyas Talpade and Irfan Khan. Several popular television stars will also be seen giving sizzling performances. The highlight of the event will be Dabangg Salman Khan who will perform on some of his hit tunes. The gorgeous Diva Priyanka Chopra will also woo the audience with her mesmerizing and sizzling act. Southern superstar, Dhanush, the voice behind the Kolaveri Di fever rounds off the evening with his first ever live performance at the awards show. The show also introduced a new social category – male, female and film honoring those who entertained audiences with a message.
So Tune in to the BIG STAR Entertainment Awards to watch this star studded night on Dec 31st, 10 pm only on STAR Plus. 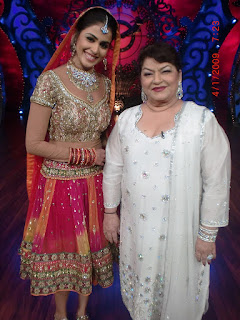 Nach le Ve with Saroj Khan Season 3 Grand Finale:
All good things come to an end and it’s time for Nach le Ve Season 3 with Saroj Khan to end on a magnificent and grand note with its high octave Grand Finale. Celebrities, dance, music will all come together on the Grand Finals of Nach le Ve with Saroj Khan. Watch participants Chaitanya-Ashit Dhawan, Tapeshwari, Karishma Tanna-Gaurav Chopra, Prerna Wanvari, Neha Marda, Akshat Saluja, Pooja Kanwal, Jannat Zubain Rehmani-Khushali Hirani and Neil Bhatt-Jayshree Venkatraman fight it out for the title of the ultimate dancing star in this seasons Nach le Ve with Saroj Khan. This dance battle is sure to get everyone on the edge of their seats and the excitement will make the audience groove.
This Grand finale will also see famous actress Genelia D’souza put on her dancing shoes and dance on Saroj Khan’s most famous dance numbers.
To make sure you don’t miss a single moment of this fun and excitement with your own television stars and the ultimate dancing divas Saroj Khan, Malaika Arora and Genelia D’souza, tune in to watch Nachle Ve Season 3 with Saroj Khan on Friday, 31st December-10 pm only on Imagine TV. 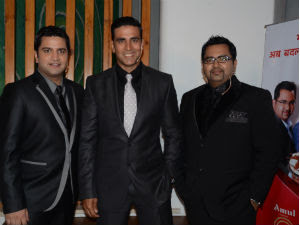 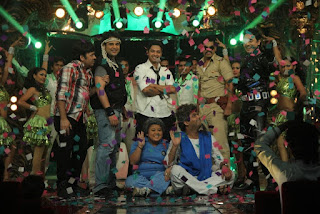 Comedy Circus Welcome 2012:
Comedy Circus will be seen welcoming 2012 with a bang! The special New Year episode will be packed with sizzling performances from ‘Chaamak Chhalo’ Rakhi Sawant and various actors from TV fraternity. They will surely make your New Year celebration more dazzling and glittering by their acts! So what are you waiting for, sit back and enjoy this laughter ride of breathtaking dances and rib tickling acts!
So tune in for this and lots more on Comedy Circus Welcome 2012 on 1st January 2012 Sunday at 8:00 pm on Sony Television.
Swati Ghosh
Rangmunch.TV
Comedy Circus Ka Naya Daur Imagine TV MasterChef India Nachle Ve with Saroj Khan Season 3 Rangmunch Sony Entertainment TV Star Plus Swati Ghosh