By Rangmunchtv January 01, 2012
We bring you the last write up on StarOne today. Tomorrow we will step into a New Year. A New beginning. StarONE as a channel gave opportunities to many that wanted to experiment, looked for variety as well as dared  to think different from the regular stuff we got to watch on TV. Hence shall be always fondly remembered.
Hitesh Kewalya, who currently writes for Channel V's Humse Hai Liife and Is Pyar Ko Kya Naam Doon on StarPlus, started his career with Miley Jab Hum Tum, that was hugely popular among the youth. Needless to say Hitesh, has always been associated with young and spunky shows and infuses a fresh flavor in all his work. Over to Hitesh!

Q. 1 What about StarOne appealed to you the most as a Channel?
Hitesh: I remember when Star One was launched. At that time my point of view was more as a viewer as I hadn't started working then.
It looked fresh...inviting and had a youthful appeal about it. Didn't know that I'll start my television career with a show on the same channel. 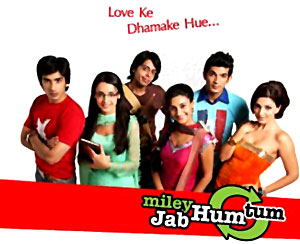 Q. 2 How has your journey been as a maker with the Channel and the shows you did?
Hitesh: Miley Jab Hum Tum launched me as a writer in the television industry and that's why Star One is more like a milestone in my life. Its been a great journey where the channel was more like a platform which enabled so many like minded creative professionals to come together and  create. I still remember...the dialog reading at the channel office of the first draft of the first episode of MJHT that i had written. I was nervous and there were like 10-12 people around the conference table...just staring at me. Everyone knew everybody else there but I was blank...So i just decided to dig my head into the script and just do what i could do best...!! Read my dialogs. 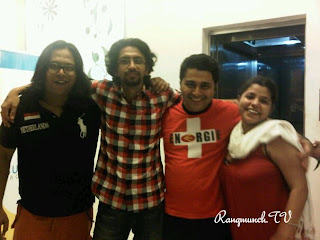 Thankfully, everyone loved it and there was laughter all around and I looked forward to each and every dialog reading session at the channel office. We were having fun...and I guess that was what worked for the show...and the channel. MJHT title track was another great experience...as the track became very popular. I was later associated with Love Ne Mila Di Jodi too...wrote its title track...Some episodes too. Still miss those 'ONE Meetings'

Q. 3 What are the kind of shows you look forward to on Life OK?
Hitesh:  I am definitely looking forward to a spunky new channel and a variety of shows that should capture the audience's imagination and who knows...Another Milestone...in the making!!
Q. 4 Sentiments on the re-vamp...
Hitesh: There's a bit of nostalgia that surrounds one when something like this happens. But with every end...there's a new beginning and with every beginning a new feeling hope.
Q. 5 A message to all your viewers on StarOne.
Hitesh: A huge thanks to the loyal...dedicated set of audience who shared the smiles and the tears of all the characters and made them their own. The audience is not just a set of eyeballs viewing an even happening...they are participants of this spectacle called a Story. A huge Thank you for all the bouquets and the brickbats for all the love and the hate mails for all the likes and the dislikes.
We thank Hitesh on behalf of Rangmunch.TV for sharing his StarOne journey with us and wish him all the very best with all his work.
Interviewed and Edited by,
Niharika Vidya Sagar
Rangmunch.TV
Hitesh Kewalya Iss Pyaar Ko Kya Naam Doon Life OK miley jab hum tum Star One