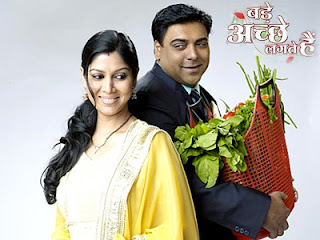 In tonight's episode Ram will shout and loose his cool on someone on the phone.Priya tells herself to be prepared for a showdown.Ram comes to Priya and tells her that he has come home to collect his files, and in doing so says his apologies. Will Priya accept this rushed apology or will they once again end up arguing over trivial things.

Jhanvi gets a call from the doctor and she gets to know that Viraj has met with an accident.She rushes to the hospital. Viraj is visibily irritated on seeing the doctor, but Jhanvi takes him home.Initially Viraj stubbornly refuses and resists as much as he can , but wounded as he is , he gradually gives and allows Jhanvi to care for him.This gives Jhanvi a little hope for the marriage .Tune to Life Ok to catch this intense drama.
Navyanka
Rangmunch.TV
Bade Acche Lagte hai Dil se di dua Saubhagyavati Bhava Life OK Rangmunch Sony Entertainment TV