By Rangmunchtv December 02, 2011
In a show every scene is important as it takes the story forward. But you will be amazed to know the amount of effort that goes into putting up a scene. The cast rehearses the scene innumerable times to get the right emotions and expressions, while the crew also tries to work on setting up the mood and ambience by adjusting the lighting and deciding on the various camera angles.
As Rangmunch.TV believes in bringing forth behind the scene segments of show making, so here’s a small snippet from the show Iss Pyaar ko Kya Naam Doon on Star Plus, where Barun and Sanaya who play Arnav and Khushi are seen rehearsing a forth coming scene to ensure that the viewers eventually get to see the best of them on screen.
There are additions and instant improvisations made on the spot to enhance the final product. 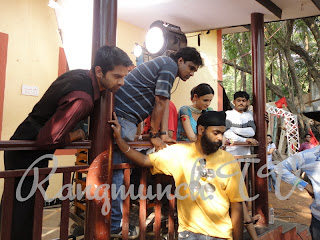 While you watch this we at Rangmunch tried to dig out who this “AMAN” is to whom Arnav is seen talking to all the time on the phone. For a brief few seconds you see a man in a yellow T shirt taking up some screen space on this footage. Aman is a member of the Direction team and is very much a part of every frame that is shot. It is interesting to note the tongue in cheek humour that the makers subtly try to infuse in the show that goes on to add a personal touch to it. The names you hear, are actually the names of people working in and around the show. A while ago Arnav was also shown to be conversing with Lalit during one of his onscreen conversations. Most of you are already aware that Lalit Mohan also happens to be the Director of the same series.
This scene however was shot by Arshad Khan who is the other Director on the show. The breath taking visuals are provided by our very dear Hrishikesh Gandhi who is also associated with Star One’s Hit show Geet Hui Sabse Parayi.
So now when you watch the above scene, you know of all that happens on the other side of the camera as well.
Happy Viewing!
Niharika Vidya Sagar
Swati Ghosh
Rangmunch.TV
Arshad Khan Barun Sobti Hrishikesh Gandhi Iss Pyaar Ko Kya Naam Doon Lalit Mohan Niharika Rangmunch.tv Sanaya Irani Star Plus Swati Ghosh