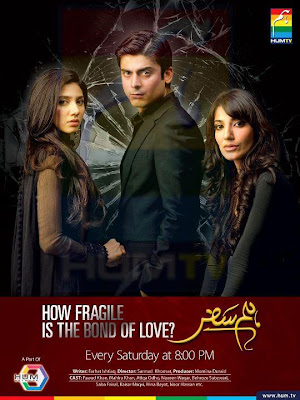 Author’s note: Watching six episodes of Humsafar at a go was akin to plugging my heart into an electrical socket for charging.  I was happy I was finally getting down to catch the episodes I sorely missed these last few weeks. As I started watching them one after another, my heart started thudding at a faster pace with each passing episode and even came to a standstill at few scenes which left me literally thumping at my chest to ease the pain that was quickly replacing my heartbeat.
Part of me envies those of you who have watched the episodes every week with enough days in between to recover. Another part of me is thankful for things that kept me away for it would have been impossible to concentrate on anything else while letting go of the injustice meted out to our dearest Khirad.
Swallowing the choicest of ‘gaalis’ in all the languages I know, aimed at those responsible for breaking a beautiful relationship,  I begin to pen down my thoughts on the episodes, which have brought life to emotions that clearly demarcate  human from evil.
Last drops of romance before the storm:
Episode 9 features two of the cutest romantic scenes between Ashar and Khirad. There is something about rains that magnifies our feelings many fold. And romance is one which is instantly associated with rain. Khirad’s childish glee at getting wet in the pouring rain in their yard with Ashar’s loving gaze and gentle laughter teasing her about it has been shot to perfection. 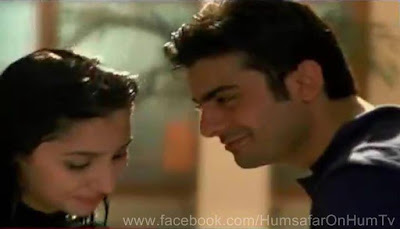 Another scene that made me grin is when Ashar is about to drop Khirad at her friend’s marriage.  Ashar’s reluctance in letting Khirad out of his sight and his possessiveness, pride in her beauty, and above all his singular devotion towards her is evident in this scene. Probably the last romantic scene between them for a while before all hell breaks loose.
Too Little Too Late
After an agonizing week apart in which Ashar does not speak with Khirad due to his insecurity regarding her non-existent relationship with Khizar, he finally calls her to let her know how much he misses her and loves her. Khirad is eager to have him back as she awaits to share the news of her pregnancy with him. Ashar rushes back home only to witness a scene play out in front of him that shocks and shatters him. 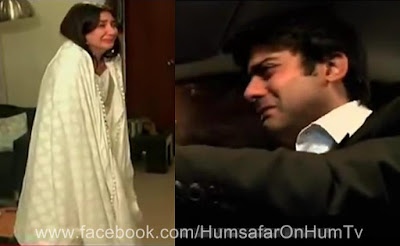 Betrayed by those closest to them, Ashar begins to hate Khirad, while Khirad gets kicked out of her home by Ashar's mother in his absence. She leaves for Hyderabad nursing a broken heart and their baby in her womb. She takes refuge with Batul khala and her family who support her through one of the toughest times in her life.
“Hell hath no fury like a woman scorned”
But I failed to realize it included mothers like Farida who would go to any extent in the name of pride, family status, and misplaced love even if that meant ripping apart her son’s heart to pieces. She took the term ‘evil’ to a different level with her flawless scheming and callous disregard for her son’s feelings.
Last nails in the coffin:
~ Hearing his mother state that Khirad left their home with Khizar never to return shakes Ashar to the core and shatters him into a nervous wreck. He vows never to let Khirad into his life ever again. 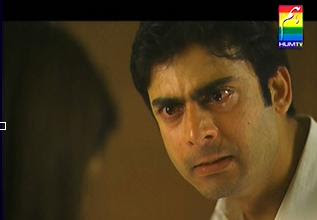 Less said the better when it comes to Khizar's reasoning behind his betrayal. He ruthlessly squashed an innocent woman's dreams to further his own. His words about Khirad's incompatibility with Ashar were designed to act as an arrow dipped in poison to relentlessly prick at Ashar's already bleeding heart.
RMM #2 The scene where Khirad wakes up in the dead of the night and prepares to leave for Karachi to meet Ashar and set things right is something that will haunt  me for a very long time. Khirad tries desperately to remove the imaginary filth and grime that she feels has stuck to her. It symbolizes her inner turmoil at her name and character being tarnished and her desperation to clear her name of all the muck that has been unjustly thrown at her.
Writer Farhat Ishtiaq, director Sarmad Khoosat, and actor Khirad get a standing ovation from Rangmunch for giving us a scene that transcends excellence.
Questions swirling in my head:
1.   Why would Khizar help in breaking Ashar and Khirad’s marriage for Sara’s sake when he is blindly in love with Sara himself and would make more sense for him to want Ashar to be happy with Khirad leaving Sara free to be pursued by him? This is besides the money angle to his reason for betraying Khirad’s friendship.
2.   Love is like a sunlight streaming through one’s heart. Take the sunlight away, replace it with a candle or a torch and its not love in its purest form anymore. Why would any woman want to settle for a love that is forcibly attained through scheming and plotting?  It is sad that an intelligent, independent, modern girl like Sara will want to possess love by devious means instead of letting it shine through her heart on its own accord.
Precap for Episode #15


Brace your hearts for a combustion when Khirad meets Ashar after few years of estrangement. The promo promises yet another awesome episode from the makers of Humsafar. And am sure everyone is looking forward to meet Khirad and Ashar's little one, Hareem.