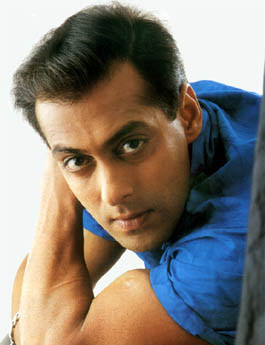 Agar Miley Khuda toh
Poochunga Khuda yaaa....
Jism Mujhe Deke Mitti ki
Sheeshe sa dil kyun banaya...
Aur uspe diya fitrat
ke woh karta hai Mohabbat
Wah re Kya teri kismat ...
And thus he leaves millions of hearts across the world beating faster each time he comes on screen! Meet the self proclaimed bad boy with a soft heart, a man who loves "Being Human" and also goes out of his way for people that matter to him!
My first heart-throb and perhaps the only one ever since, Salman Khan celebrates his birthday today!!! Like wine, he only gets better with age!We on behalf of Rangmunch.TV wish him the best of health, wealth and happiness!!!
He once said in an interview, "every girl starts behaving like your mom after two-three years of being in a relationship, and I already have a mom"! Kudos to the man who minces no words!
Recently when we caught up with Harshad Chopra, who plays Mohan in Dharampatni, on Imagine TV he admitted his only dream is to meet Salman Khan in person once in his life time. Actress Gia Manek who plays Gopi in Saath Nibhaana Saathiya is no different. She was so thrilled she couldn't contain her joy, as she saw her dream man right in front of her eyes recently. Humse Hai Liife Actor Aditi Chopra confesses, she wants to be Madhuri in Hum Aapke Hai koun since she wants to act opposite Salman, and she further adds, if that doesn't work out, she wouldn't mind being adopted by him as well!
Here's to a most eligible bachelor in Bollytown Salman Khan!!!
Happy Happy Birthday!!!!
Niharika Vidya Sagar
Rangmunch.TV
aditi chopra Being Human Birthdays Dharampatni gia manek Harshad Chopra Imagine TV Rangmunch.tv Saath Nibhana Saathiya salman khan