By Rangmunchtv December 25, 2011
On Christmas, Rangmunch.TV is back with its regular weekend dose of Awww n Hawww moments. So let us do a quick recap and check them out! 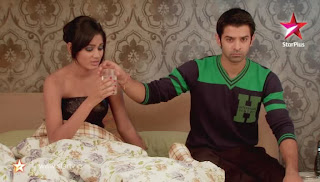 Iss Pyaar Ko Kya Naam Star Plus:
Finally Lavanya bid adieu to Arnav and the entire Raizada family on knowing that her relationship with Arnav had no future. Even though she was extremely heart broken and hurt, but she was not bitter towards Arnav. She pleads the family members not to blame Arnav, while the viewers go awww seeing an initially selfish La turn into selfless Lavanya.
Parichay on Colors:
Both Kunal and Siddhi tries and resolves each other’s tension. While Siddhi arranges the money for Raveena’s mehendi ceremony, Kunal finally gets Shilpa her right match. Awww!!! However, Richa and Rohit continue to play their foul games in trying to win over their love. While Richa is using Vineet to win back Kunal, Rohit on the other hand manipulates Nisha to lie and puts Raveena into a dilemma. Hawww!!!
Diya Aur Baati Hum on Star Plus: Meenakshi finds out the biggest truth as she over hears Sandhya talking in a cybercafé and informing her Bhabhi about her brilliant result. In order to teach Sandhya and the family a lesson, she files a police complaint against Bhabho for Domestic Violence. Meanwhile Sandhya is restless and wants to tell the truth about her being qualified both to Suraj and Bhabho, but just when she is about to do so police comes into the picture and arrests Bhabho. Hawww!!!

Kuch Toh Log Kahenge on Sony Entertainment Televison:
Ram Milaye Jodi…but here the jodi is not of Ashutosh and Nidhi. We are talking about Armaan and Rohan. Well these two good souls decide to bring the two lovebirds Ashutosh and Nidhi together. With a lot of hit and miss, Armaan and Rohan’s plan succeed as Dr. Ashutosh and Nidhi come face to face at the Dargah where they had come to pray and ease their restless soul. As they both gaze at each other in complete awww, we all felt like saying Rab ne bana di Jodi!!!

Ek Hazaron Mein Meri Behna Hai on Star Plus:
This week the viewers saw some really sweet moments of love and romance. Viraat plans a night out for Viren and Jeevika so that the newly wed couple can find some time for themselves away from the family..awww!!! On Jeevika’s birthday, Manvi decides to gift a cake and takes Viraat’s help. She turns Viraat into a Master Chef as he bakes a cake for his Bhabhi dearest on Manvi’s instructions. Awww how cute!!!! Last but not the least, Viren too leaves no stone unturned to make Jeevika’s birthday the most memorable moment. First he goes missing, leaving Jeevika and the entire family worried and in tears, but on his return he takes everyone by surprise, especially Jeevika, as he brings in her birthday gift. Jeevika gets emotional as she sees Manvi before her eyes and realizes why Viren went missing. Awww!!!

'Dil se di dua…Saubhagyavati Bhava?' on Life OK: Hawww!!!Hawww!!!Hawww!!! Yes this is the only reaction that viewers might have had watching every episode of this show. Jhanvi’s dreams of a blissful married life soon turn into a nightmare as she gets to witness the over possessive nature of her husband Viraj. While Viraj appears to be a thorough gentleman to the outside world, only Jhanvi gets to see the real Man behind the mask. For no fault of hers, Jhanvi undergoes mental and physical abuse from Viraj, which makes her life a living hell. While Viraj’s behaviour towards Jhanvi is still a mystery, we only hope that we get to see some awww moments between the two in the forth coming episodes.
Rangmunch.TV wishes all its readers and viewers a Merry Christmas!!!
Swati Ghosh
Rangmunch.TV
Colors Dil se di dua Saubhagyavati Bhava Diya aur baati hum Ek Hazaro Main Meri Behna Hai Iss Pyaar Ko Kya Naam Doon Kuch to Log kahenge Life OK Parichay Rangmunch Star Plus Swati Ghosh