Awww and Hawww Moments of the Week!

By Rangmunchtv December 11, 2011
An exciting week with loads of twists and turns, lets see what made us go awww and hawww!

Kuch toh Log Kahenge (Sony Entertainment Television) The mid-week saw the break down of the wall named Ashutosh, who had been holding so much of himself back only to release it all in one moment. It looked as though he had been dying to share the state of his heart with someone. That's why with one persuasive push of a button by Armaan, Ashutosh crumbles into a million pieces and confesses his love for Dr.Nidhi, and later recomposes himself into the same old form when he admits that their love story would not be possible due to their age disparity and the fact that he didnt want to come in the way of her normal life, career and family.
One does end up feeling bad for these two, since their destinies are so inter-locked that Nidhi later discovers at a new job interview that Ashutosh is on the panel of doctors picking the new intern. How long are the two going to fight the tide, one will have to see.
Awww !!! 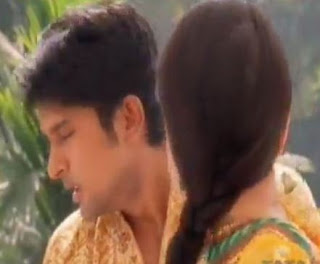 Is Pyaar Ko Kya Naam Doon( Star Plus): As the promo's of Khushi finally learning Shyam is indeed married Anjali hit the screen. Fans heaved a sigh of relief. The man has over the months earned many names among the fan fraternity such as creep, snake, spam. Kudos to actor Abhaas Mehta for playing the role so convincingly. Now, as the story showed, Khushi begins to put two and two together after discovering something around Shyam and the Raizada family is fishy. She wastes no time in grind haulting her thoughts but allows her gut to take over her, and what she see's does leave her totally shocked.
After his sudden disappearance during the Raizada's visit to the Gupta home, and hearing someone call Anjali Rani Sahiba over the phone, Khushi confirms her speculation, by confronting Shyam at the Pooja where she finally comes face to face with Anjali's husband! Fatakk! goes the resounding slap, as Khushi gives a piece of her mind to the slimy man and runs away from there only to land in ASR's arms!

While the latter moment where Arnav instantly knows the tears in her eyes are thanks to her fiancee deserves and Awww, the revelation that finally happened takes the crown for the Hawww moment of the week!

Bade Acche Lagte Hai (Sony Entertainment Television) Andar kitni Garmi Hai, Bahar Kitni Sardi Hai...well, while this Govinda number hardly describes Ram and Priya as a couple, this week the couple on their honeymoon discover a new side to one another. While Ram gets stuck inside a mall, Priya refuses to leave the premises waiting for him on the other side of the glass door. Both of them fall asleep on the either side, occasionally smiling at one another, stealing glances as well as smiling each time they wake up. When the door opens finally, Ram discovers Priya has caught a cold, and as thank you gesture lines up a bunch of doctors just to make sure she is fine! Priya confesses she is not used to being pampered so much. As a mark of their friendship Ram gifts Priya a diamond ring and these series of events end up bringing the two a little closer than before.
Awww!

Geet-Hui Sabse Parayi (StarOne): Depression took over fan forums all over as the news of their beloved show going off air broke out in the open. Most fans were inconsolable, at the thought that they would no longer see their favorite jodi Maaneet together on screen every day. However, understanding the state of the fans hearts real well, the makers have incorporated a sweet closure track where various romantic moments have been shown between the leads. Maan and Geet take off on a honeymoon where they spend some quiet moments together!
However there are some questions that one still has to find answers to.
Will Maan's memory ever return?
What will Maan and Geet do when they realize Dev-Nandini and Lucky-Preeto have landed up in the same hotel with similar plans as Maan and Geet?
Truly a family tha eats together, lives together!
Hawww!!!

Ek Hazaro Main Meri Behna Hai (Star Plus): Manvi is that one chord in the show that cannot be missed, lest the song loses its essence in total. This week when Beeji decides to keep Manvi away from the wedding proceedings, your heart already starts to cry for her. Things however take the much fated turn when Jeevika, on discovering Manvi hasn't been around puts her foot down that she will not get married until she see's Manvi at the wedding. Though Swamini, is super annoyed that Manvi is as much a menace in her absence as she is in her presence, Viren's assent to Jeevika's demand, brings Manvi right back on the scene and the wedding celebrations take place in the right spirit. The scene that was a tear jerker though a cliche was when Manvi lets go of a sum of money and takes a promise from Viren jeeju that he will always keep his sister happy. Virat also scores his share of points when he allows Manvi to get away with hiding the shoes though he knows where exactly she has hidden them! Do we see the start to a heart-warming love story here?
Awwww!!!

While you ponder over these moments, we will be back again with our share soon! Have a great week ahead.