The Finale Week of KBC!!! 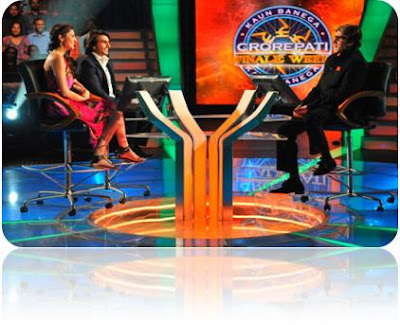 The latest buzz in B-Town is coming straight from the sets of Big B’s quiz show Kaun Banega Crorepati.
From Shaadi Mubarak to KBC!!! Viewers will now get to see their favourite jodi Bitto and Shruti on the hot seat of Kaun Banega Crorepati. The Finale week will mark the entry of various well–known faces from Tinsel town. The latest being Anushkha Sharma and Ranvir Singh of Band Baja Baarat fame.
It so happened that before the shooting began; Anushkha and Ranvir were busy in a quick Dekho of the sets of Panch Koti Maha Money Kaun Banega Crorepati when Big B passed them for a quick rehearsal! Both Anushka and Ranvir were heard saying that they were complete awestruck after Big B crossed them and almost froze!!! Kya karenge, such is the effect of Senior Bachchan!!!!
All this and more coming your way on KBC, tonight at 8.30 pm only on Sony Entertainment Television. So join in the finale week  and be a part of your favourite show!!
Edited by:
Swati Ghosh
Rangmunch.TV
amitabh bachchan anushka sharma Kaun Banega Crorepati Rangmunch ranvir singh Sony Entertainment TV Swati Ghosh