Chidiyaghar depicts basic human values like love, respect for others, patience, and the true meaning of a family and togetherness that makes us humans. The show will see some prominent artists like Rajendra Gupta, Sumit Arora, Paresh Ganatra, Shilpa Shinde, Debina Bonnerjee and many others.
While we at Rangmunch.TV had already published an article giving a brief insight into the concept of the show, today we shall unveil the characters of Chidiyagarh.
Chidiyaghar is no zoo but a house named after Late Mrs. Chidiya Narayan, wife of retired principal, Shri Kesari Narayan.

KESARI NARAYAN, Babu Ji (Rajendra Gupta)
Babuji, a man of principals, true to his name roars like a lion & is indeed the final authority in family matters. He likes talking to the portrait of his wife. He gets confused very easily while tutoring his grandchildren. His attempt to keep everyone happy in the house makes him a very endearing character. 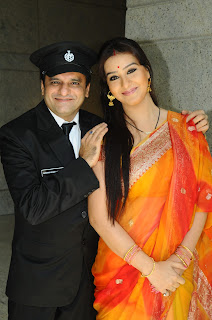 GHOTAK NARAYAN (Paresh Ganatra):
Ghotak is elder son of Kesari Narayan.He is a Ticket Collector with the railways for almost 10 years now and has adapted to living in the train to such an extent that he’s converted his bed into a train berth with a chain hanging over his head, a fan that works only when pushed with a comb, safety messages written all over and a iron barred window from where his wife Koel calls for him.
KOEL NARAYAN, Ghotak’s Wife (Shilpa Shinde)
Ghotak’s wife is a self claimed singer and has a habit of talking in the style of singing. You may only see her singing well when there’s a song already playing in the background. Hailing from a rich house, she often likes to boast in pride of her legacy. 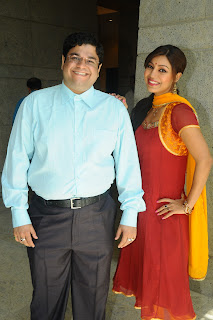 GAUMUKH NARAYAN (Sumit Arora)
Gaumukh is an English teacher in a . As the name suggests, he’s as simple as a cow. He’s the one who buys the vegetables, milk etc for the entire family. A strict teacher, he never forgets to even punctuate the sentences that he speaks. A loyal husband, he never forgets to praise his wife at least ten times a day.
MAYURI NARAYAN, Gomukh’s Wife (Debina Bonnerjee)
Mauri loves to dance. She’s learnt everything from Kuchipudi to Kathakali. Her gestures thus are highly affected by the same. She thinks of herself as the most beautiful woman she has ever come across. She has the upper hand in her marriage with Gomukh & loves being praised by her husband all the time.

BILLO BUA, Kesari’s sister, (Bharti)
Billo bua arrives at Chidiyaghar without any prior notice. She is someone who has the answers for her own questions. So if she’d ask you something, she won’t wait for you to answer, instead she would answer her own question on your behalf. She’s really fond of her brother Kesari. Billo bua has an overpowering personality in the house and everyone listens to her when she speaks.
KAPI NARAYAN, Youngest brother (Saransh)
The third and the youngest brother in the house keep jumping around the house like a monkey. He likes to ape others and write love letters to his neighbour, Memna but has never been able to propose to her yet. Memna though has genuinely tried to understand what he writes in those letters but has always failed as his English is completely incomprehensible.
Chidiyaghar promises viewers across an entertaining, fun, family time together every week from Monday to Friday 9pm onwards from 28th November exclusively on SAB TV.