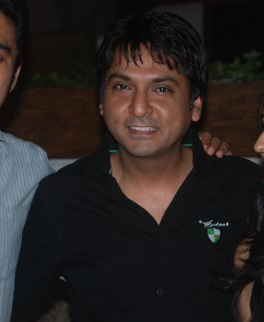 Rajesh Chadha, the Producer (Panglosean Entertainment) of Iss Pyar Ko Kya Naam Doon, is in the seventh heaven with his show touching a century  . The show has become a craze with the youth with the amazing chemistry shown between Barun and Sanaya who play Arnav and Khushi on the show. The freshness, the innocence and the mass appeal drama has made it No. 2 in the TRP list. We at Rangmunch contacted and congratulated  Mr. Chaddha  on having touched this milestone and asked him how he feels about the show , the cast, the crew and overall euphoria .

"I'm extremely happy and proud of my team and my viewers for having touched 100 episodes today. Its always an honor to be appreciated . The audience have given us much love in accepting this wonderful story. I always thank my team before I thank anyone else. Without them , nothing would have been possible. Let me tell you that this show came through in flat  8 days. We got confirmation to start the show on 7th April and and by 15th April we started shooting at an outdoor location with choppers. In seven days if we could  pull off such a start to the show, its because of the team I have. The patience and all hard work they have put in this is  commendable. People tend to leave under pressure, but my team stuck on with each other from then till now."


"One person I would sincerely like to thank is "Nissar Parvez". Nissar is a great guy. He helped us immensely in setting  up the show in the start. He is the one Director I really look up to. He is an ace when it comes to such intense subjects. The writers also have put in their efforts in coining different phrases and lines for the actors. The different departments have worked more than their share and gave it a No 2 position in such a short span."
"One person who has pleasantly shocked me is "Sanaya". I was a bit skeptical initially as she had worked in Mile Jab Hum Tum, where she played a diametrically opposite character. I was  with  Endemol when that show aired. I was not sure if she could do Khushi convincingly but she has gotten into the skin of the character so beautifully, that its  truly amazing. She is a stunner and has given more than herself to this character. The jalebi bit has its own history too. In fact my mom is diabetic and when so much jalebi is shown, she complains of how she cant have it, and we have only added on to her craving levels"

“It feels great to touch such heights in such a short span and we promise to give more to the viewers in the future.”
We at Rangmunch congratulate the team of IPKKND once more on completion of 100 episodes.
CHEERS Iss Pyaar Ko Kya Naam Doon....!!!!
Interviewed by:
Niharika Vidya Sagar
Edited by:
Navyanka Varma
Rangmunch.TV
Barun Sobti Endemol Iss Pyaar Ko Kya Naam Doon Nissar Parvez Rajesh Chada Sanaya Irani Star Plus