Rangmunch.TV welcomes Anand Sivakumaran ON BOARD! 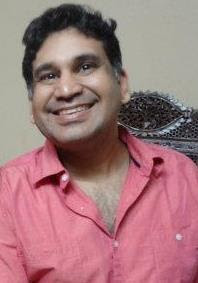 Anand Sivakumaran really does not need any formal introduction because his work speaks for who he is and what he stands for. However, it is an honour and priviledge for Rangmunch.TV, to talk about this Writer and Director of Mumbai’s Television and Film Industry.
What is the first thing that crosses your mind when you hear about a person who is a Chemical Engineer from IIT? With due respect, I will tell you what comes to my mind when I hear about an IITian. He is definitely going to be intelligent (obvious isn’t it?), will be working in a Corporate Firm at a Senior Management position, earning a handsome package per annum, probably not very talkative and definitely not Creative.
But when Niharika and I met Mr. Anand Sivakumaran in , he pleasantly surprised me. He was just the opposite of what I had in mind except for the fact that he is extremely intelligent. He is a superb conversationalist with a witty sense of humour and sarcasm. He gripped my attention from the word GO and I was amazed at his straight forwardness. He is a Creative genius and knows the nitty gritties of the Television and Film Industry like the back of his hand. As we spoke, I also realized that he is a man who has immense confidence & self belief and readily takes risks in life, orelse he would not have chosen the media industry as a profession which is not only opposite to what he has studied but is highly unpredictable too.
Anand has done a considerable amount of work on Indian television and has written shows like Miley Jab Hum Tum, Jab Love Hua, Shakira, Jassi Jaisi Koi Nahin, Lucky, Kabhi Haan Kabhi Naa, Yeh Hai Mumbai Meri Jaan. He has been Executive Creative Director of Rose Audio Visuals. He was a writer and Associate Director on an episode of Rishtey - Izzat Ka Falooda that won the ITA award for best Mini Series. His film (Dreamers a 32 minutes short film on which he was the Screenplay writer) won accolades at festivals abroad. Before entering the Entertainment Industry, he also tried his hands at Advertising, Journalism and Event Management.
Currently Mr. Sivakumaran is all set to make his Bollywood Directorial debut with MONEY DEVO BHAVA - an edgy, topical youth movie about greed and consumerism and how it drives college kids to amoral activities.
Rangmunch.TV, is extremely happy to announce that going forward Anand will write weekly columns for our readers. The articles will be driven by his real life experiences that he has encountered during his journey in the industry. He is a man who does not mince his words and calls a spade “A SPADE.” So all you people out there who always wanted to read and know about the inside stories of the Entertainment World, do look forward to Anand’s write-ups. We assure you that every article will be a "Reader’s Delight."
We welcome Mr. Anand Sivakumaran ON BOARD, and are eagerly looking forward to start this column on our very own blog.
Swati Ghosh
Rangmunch.TV
Anand Shivkumaran miley jab hum tum money devo bhava Niharika Rangmunch Swati Ghosh