By Rangmunchtv October 23, 2011
(Pop! goes the corn – Salt Cheese and Caramel
We pick the movies apart, kernel by kernel
You rate it ‘Salt’ when the movie is bad and don’t care
‘Cheese’ is when you like it and call it just fair
Sweet ‘Caramel’ it is when you want to see it once more
Is the movie good bad or ugly? Do let us know for sure!) 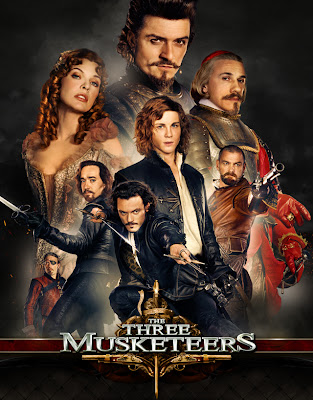 As I settled into the snug seats at the theatre to watch the latest action-adventure movie, The Three Musketeers, my concentration was more on which flavored popcorn to snack on – salted, cheese, or caramel, and which drink to guzzle up than the movie itself. I never gave it a thought really. Come on! Haven’t we seen it all before? After all, Alexander Dumas’ Three Musketeers has been done to death in every mode possible – cartoon, art, drama, adventure and here I was settling in to watch it on the 3D mode.

I was staring at the tub full of cheese popcorn in my hand through my 3D glasses when my attention was drawn to the screen by the three musketeers – Athos (Mathew Macfadyen), Porthos (Ray Stevenson), and Aramis (Luke Evans) - and it stayed there for the rest of the movie. They were in quest of a map with a devilishly beautiful partner, Milady De Winter played by lovely Milla Jovovich, in tow. She steals the heart of Athos and ours in the initial scenes, only to betray the musketeers and us by turning out to be a double agent.
The now out of work and down on luck musketeers are joined by an aspiring musketeer, D’Artagnan (Logan Lerman) and together they set out to steer France away from falling prey to the devious plans of a cardinal closest to the King who is helped by none other than the deadly assassin, Milady. And the foursome accomplishes this on the steampunk-influenced airship, which has been used effectively for optimum 3D effect. Throw in an enemy in the form of Duke of Buckingham played to perfection by heartthrob Orlando Bloom, and we have a visual delight.
The Heroes
Born to be heroes, trained to be warriors, destined to fight for , these musketeers not only protect the king and the crown but also the future of . 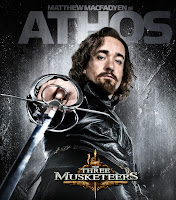 Athos:  A fierce swordsman and immensely loyal to , he is in constant search of a great cause. He is scarred in the matters of heart. Mathew Macfadyen plays the wounded in love, yet stronger due to it part to perfection. 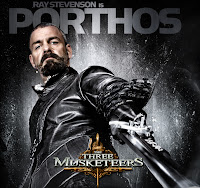 Porthos: A musketeer whose heart lies in fine clothing and fair ladies, he uses his brute strength to his advantage in the battles to protect . Ray Stevenson fits the bill of a strong man with a dry wit. 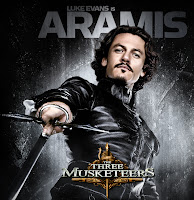 Aramis: A man who was once a priest, now fights alongside the musketeers, in the name of God to protect the honor and justice of the country.  Luke Evans plays the musketeer, who is swift with his sword and calmer than his counterparts. 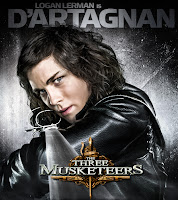 D’Artagnon: A wannabe musketeer who is hotheaded and impulsive, he deeply falls in love with Constance, the lady in waiting to the Queen. The new boy on the block, Logan Lerman, is more than just a lover boy in the movie. He proves his mettle by matching step for step with the legendary musketeers.
The Villains 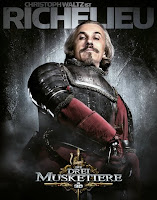 Cardinal Richelieu (Christoph Waltz): The cardinal at the , he plots to overthrow the King with a devious plan, as he has his eyes set on the throne of .

Milady De Winter (Milla Jovovich): The deadly assassin, a double agent, betrayer of hearts, she dons several roles under the garb of a bewitching beauty. She aids the Cardinal in his treachery.

Duke of Buckingham ( Bloom): The charming, wiser counterpart of the King, Duke of Buckingham along with Milady, plot the downfall of . Orlando Bloom once again plays a character that is sure to set hearts on fire, though he is wasted in such a miniscule role.
Royal Court: King Louis & Queen Anne

While King Louis (Freddie Fox) is unaware of the unrest in his own court, the Queen Anne () on the other hand is wise and very much aware of the existence of evil amidst them.

The King is so adorable. I know that ‘adorable’ is hardly a term used for Kings but he sure was. He is the King who refused to grow up, which is established right at the start with the chess scene.
The Queen of France is an absolute delight to watch. She is the Queen who unwittingly commands an allegiance from anyone who sets eyes upon her.
There is no beating around the fact that the plot of the movie is as thin as ice. It was a visual treat, but frankly, I don’t think there is any movie that is made in the recent times that isn’t visually appealing. There was nothing about the movie that stood out but surprisingly, I thoroughly enjoyed watching it.

My Verdict: Cheese!
It is a one-time watch. Just forget about literature, underdeveloped characters, the blips in storyline, and other small insignificant details and go along with the musketeers for a joyride on the airship!
Just so you know, they have left the story open for a sequel. Maybe the characters will evolve in the next one. So until then, All for one, and one for all!
Adios Amigos! Catch you at the next review!
Disclaimer: I am no expert on movies or anything for that matter! The above review is just a viewer’s perspective.
Neeraja Unni
Amateur Reviewer
Rangmunch.TV
Alexander Dumas Christoph Waltz Freddie Fox Juno Temple Logan Lerman Luke Evans Mathew Macfadyen Milla Jovovich Neeraja Orlando Bloom Rangmunch Ray Stevenson The Three Musketeers