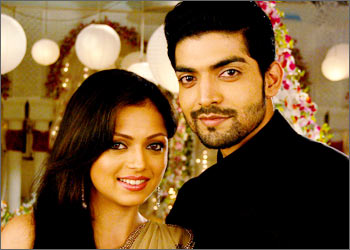 Today Colors Channel aired the Global Indian Music Academy (GIMA) Awards 2011, which felicitates Music Fraternity for all kinds of music, Films as well as Non-Films.
During the award function, Irshad Kamil was announced the Best Lyricist for his song “Pee Loon” from the movie Once Upon A Time in Mumbai.
As they played the song, my heart skipped a beat and mind was no longer interested in watching the GIMA awards. Pee Loon is probably just a melodious song for many, but for Maaneet Fans, its more than a song…it’s a “MOMENT,” that evokes thousands of emotions that are beyond words. Today I experienced the “MOMENT” all over again.
Infact, I did not like this song for the simple reason that I could never take a liking towards Imran Hashmi and nor did I find the song extraordinary. But then as they always say, Expect the Unexpected.
Friday 10th of September 2010, the Promos of Geet Hui Sabse Parayi that ran repeatedly throughout that week suggested that it was going to be the REVELATION time for Geet. She was no longer willing to hide the truth about her pregnancy from Maan. That afternoon Saas Bahu aur Saazish on Star News also played the Sone Pe Suhaaga role by airing the “Making of Pee Loon.” That whole evening I waited with bated breaths. It seemed as though the clock was moving at snail’s pace. The Geet FB wall had also become much tensed; every one including myself, hoped that the episode would not end at a cliffhanger making it the longest weekend ever. It was no less than a National Emergency on the Geet Forum.
The episode started at its usual time 9.30pm IST. With every passing second, my heartbeat increased. Then came the most awaited and breath-taking “Pee Loon Moment.” It felt like I was hearing and watching that song for the very first time on screen. I experienced a pool of emotions as Drashti and Gurmeet brought Maaneet alive in every frame of that song. They were sensuous but not sleazy. As much as I could feel Maan’s Love and Passion, I could relate to Geet’s pain and turmoil too. I actually had tears in my eyes and was praying to God to let them live the MOMENT before all hell breaks loose.
Finally, the heart breaking Revelation left me speechless and restless just like Maan. I don’t think I ever cried over two fictional characters, but that night I did and I am sure many others did too.
Today on behalf of Rangmunch.TV, I would like to thank Irshad Kamil for writing the lyrics of Pee Loon, the MAKERS of Geet Hui Sabse Parayi for giving us the beautiful and mesmerising “Pee Loon Moment” and “Maaneet” for making us Live and Re-Live this moment over and over again, even today.
Pee loon mein dhere dhere jalne ka yeh gham pee loon,
in gore gore haathon se hum dum pee loon, hai pee ne ka mausum…..
Tere sang ishq tari hai, tere sang ek ghumari hai,
tere sang chain bhi mujhko, tere sang bekarari hai…..
Swati Ghosh
Rangmunch.TV
Colors dhrashti dhami Geet Geet and Maan Geet hui sabse parayi GIMA Gurmeet Choudhary Irshad Kamil maaneet Rangmunch.tv Swati Ghosh