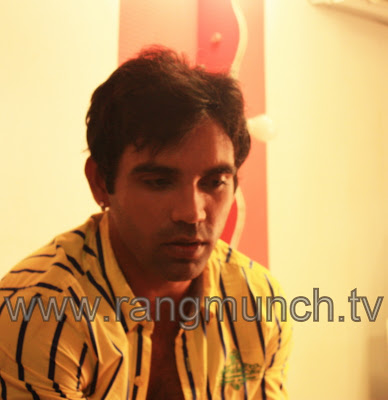 The sensitive portrayal of GAY characters in popular TV soaps seems to be playing savior for many who are not out of the closet yet. Actor Daksh Ajit Singh, 30, who shot to fame for playing Gaurav, a gay character in Maryada ; Lekin Kab Tak, a Star Plus show, says “A gay fan of mine from Delhi recently wrote that his mother loves  the show , and its through this show that she understood the gay concept and finally stopped hounding him about getting married. Most importantly she has stopped pestering him about changing his ways.“
He further said, "I also get messages from several fans who look for suggestions on how to share their sexual orientation with their parents. They see their own lives reflected in Gaurav’s."

Speaking to Daksh and observing him from close quarters, we found him very humble and down to earth. He further went on to say that he gets indecent proposals too from his male fans regarding one night stand, but he very casually brushes them off. He does inform them that he is portraying a Gay character in reel life, but in no ways he is gay in real life.

When asked how does he de-stress himself, he completely laughs it off by saying  that he never gets stressed out. In his free time one can see Daksh playing with his mobile, clicking pictures since he is fond of photography. He is also a brilliant writer, so some or the  other thought keeps pondering his mind. He also loves to paint. Basically he is a multi-talented personality with wide range of interests. He is not a party person and enjoys his privacy.
When asked about his on screen and off screen relation with Vidya and Karan
(his gay partner in Maryada), this is what he had to say … "Vidya is a good actress and I get along well with her. Even though we don't hang around together nor do we speak much after our scenes, but somehow our on screen chemistry comes out very effectively and effortlessly. Even with Karan I’m very comfortable as it’s a character I’m playing so it gets easier from both sides."
The Creative Director and Script Writer Damini Kanwal was also very apprehensive as to how people would accept  and perceive Gaurav’s character. But the response has been  overwhelming which definitely goes on to show a mature audience .
Although there have been few gay characters previously, but most of them are there to add a little humour to the scenes. However, Maryada has broken the norms by bringing in a Gay, as Central character to the plot .
This transition from showing gay characters in a frivolous light to portraying them in a strong, serious role marks the beginning of a new era.
Interviewed & Edited by
Navyanka
Niharika &
Swati
Maryada-Lekin Kab tak? Star Plus