Apart from the new set of Challenges and Contestants who have come from different walks of life to compete and win the MasterChef India Title, the show also has a new Host - Chef Vikas Khanna.
Chef Vikas has made his debut into Indian television with Star Plus’ show MasterChef India-2. He will be seen playing the role of a mentor and a judge on the biggest culinary challenge in the country.
Chef Vikas Khanna, who also served at the white house won the title of the best chef in America. “2011 New York Rising Stars Award” is one of the most prestigious awards in United States Of America & Chef Vikas is the first Indian who has won the title and made a mark for our country on an international level. 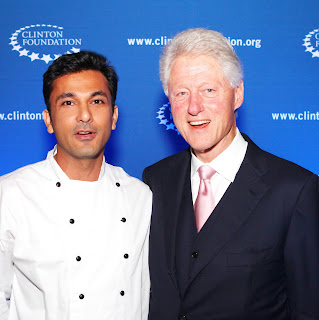 Vikas Khanna, who is eagerly looking forward to the show stated, “I am honored, surprised, nervous, tense and absolutely the happiest moment in my life. The Show is about contestants who risk everything to be on the show. I salute their courage, talent and feel privileged to have them cook for us. I will cheer for their victory and pep them up to bring in the best in them, just like so many viewers who would cheer for their victory everyday.”
Chef Vikas hails from a small town in India – Amritsar moved to New York in December 2000. He worked his way up and soon became the Executive Chef of Salaam Bombay Restaurant in New York. He is today successfully running 3 best Indian restaurants in New York – Junoon, Flavors & Feasts and Café at Rubin Museum. He is also a consultant to many restaurants in the United States. He has studied at Cornell University, Culinary Institute of America, and New York University. He frequently lectures at many universities around the country.
We hope that MasterChef India Season 2 is able to entertain the audiences and go a step forward in earning accolades from its viewers and surpass the popularity of Season 1.
Rangmunch.TV wishes the Show and its Contestants All the Best!!
Edited by:
Swati Ghosh
Rangmunch.TV
Akshay Kumar MasterChef India Rangmunch Star Plus Swati Ghosh Vikas Khanna