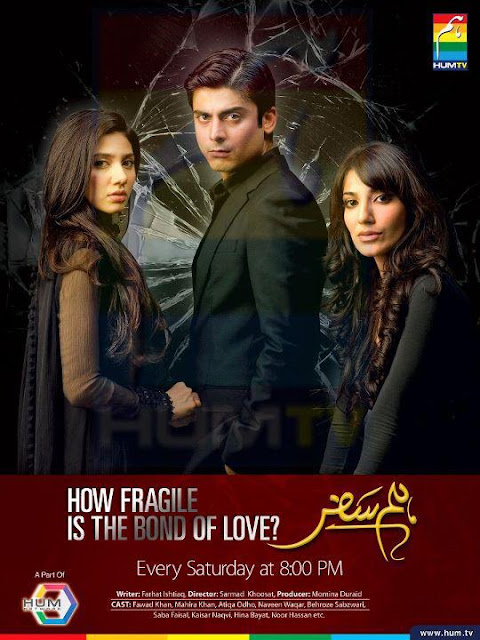 Previously on Humsafar (Episode 4):
After getting married to each other under pressure, the distance between Ashar and Khirad remains the same as before. At his parent’s insistence, Ashar tries to bridge the gap between them but is met with stoic silence on Khirad’s part. Sara is glad to see Ashar getting increasingly agitated with Khirad’s behavior around him and uses this as an opportunity to spend more time with Ashar. She vows never to leave Ashar, which further troubles her mother. The episode ends with Sara inviting Ashar over for a home-cooked dinner.
Humsafar (Episode 5) –  Icebreaker!
Sara cooks dinner for Ashar and is delighted to be having a nice meal with him and her mother. During the meal, Sara’s mother makes it evident that she is not too happy about Ashar spending time with her daughter in spite of being married to Khirad. She leaves the dining table without finishing her dinner, frustrated that she is unable to stop her daughter from spoiling her future by obsessing over a married man. Next morning, Sara confronts her mother about her unpleasant behavior at the dining table the previous night and reiterates that the best thing her mother can do for her is to let her do as she pleases.
Meanwhile, Khirad has a visitor in the form of her best friend Afsheen. When Afsheen chides Khirad about keeping quiet about her marriage, Khirad pours her heart out to her friend. She admits feeling insulted at having to live in a home where no one really needs her. Her pain comes through as she voices her feelings about being unworthy in every way of the man who is her husband. The thing that troubles her the most is the fact that she has been forced into his life.
Before leaving, Afsheen reminds her of how much her mother loved Khirad and that if she had decided to get her married to Ashar, there must have been a valid reason for that. She requests Khirad to set aside her feelings and give her marriage a chance and that she is worthy of Ashar in every way.
Baseerat and Khirad discuss books and he tells her that Ashar inherited the love for books from him. He offers to read it out to her and suggests she read books with Ashar. When she doesn’t reply and tries to change the topic, Baseerat asks if Ashar comes home late every night. He looks troubled when Khirad admits that he does.
Later that night, Baseerat confides in his wife Farida about increasingly feeling guilty for having forced Ashar to marry Khirad. He blames himself for the unhappiness he clearly sees in both. He tells her that he is ashamed to see the anger and accusation in Ashar’s eyes whenever he looks at his father. Farida reassures him that given time, everything will turn out fine for both Ashar and Khirad.
While having dinner with Ashar, Sara asks not to take her mother’s words of the night before, to heart. She explains that her mother mistakenly thinks that Sara needs protection. Ashar admits to agreeing to her mother’s view that probably they shouldn’t meet anymore. Sara pleads with Ashar to keep his marriage with Khirad separate from his friendship with her.
Khirad finally confronts her mamu Baseerat about him forcing his son to get married to a woman he does not want in his life making it unfair for both of them. When Baseerat expresses concern for her, she asks why he couldn’t have taken care of her as his niece instead of getting her married to his son against his wishes. Was it necessary for him to make her his daughter-in-law?
Ashar walks in behind them just in time to hear her say that and stops to listen. Khirad tells Baseerat that she hates the fact that she has been forced onto someone. She says she never wanted a rich husband; all she ever wanted was respect.
Ashar is moved by Khirad’s confession to his father. He recalls her saying how she had never been to anyone’s home uninvited her entire life but now she is in someone’s life by force.
Her pain, her words about her broken self-respect due to this marriage, continues to haunt him the following morning. He decides to make amends by drawing her into a conversation and making her join him for breakfast. (What we see from here on is heartening to our souls)
His entire demeanor towards Khirad goes through a sea change overnight. He makes effort to come home early refusing Sara’s invitation to spend some time together that evening. In Khirad’s presence, he hardly takes his eyes off her as he begins to see her in a new light.
Ashar finds Khirad sitting by the pool, crying in the dead of the night. He quietly sits down beside her and asks for the reason. Khirad tells her about being reminded of her mother and that she couldnt stop herself from crying. Since she did not wish to disturb his sleep she came out of the room. Ashar calmly assures her that she need not leave the room for anything even if it involves crying her heart out. He gets up to go back to his room and quietly offers her his hand for her to join him. She takes his hand, gets up, and walks back to their room.
One evening he comes back home early and asks Khirad to get ready to go out for dinner to his friend’s place that night.
Later on, as he enters his room to find Khirad looking resplendent in black with her hair done up, he stops short at what he sees. He is absolutely mesmerized by Khirad and compliments her by telling her how beautiful she looks. He then tells her there is just one thing he would like to do. He hesitantly asks, ‘May I?’ to which Khirad gingerly nods her head telling him to go ahead.

What follows is a heart-stopper. Ashar quietly removes the clip from her hair to let the black tresses fall freely to frame her lovely face making her look even more ethereal. Ashar looks on entranced as a hint of a blush creeps onto Khirad’s cheeks.
Precap (episode 6): Sara schemes to plant seeds of doubt in Khirad’s mind about their relationship. She gets hysterical when Ashar tells her to move on and get married.