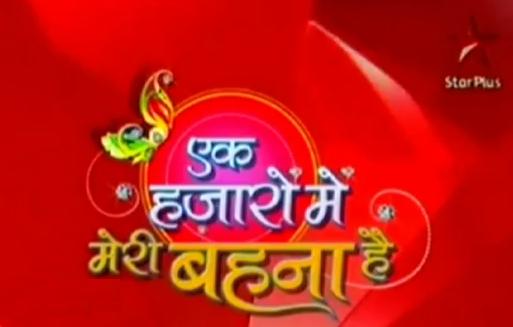 A sister is a friend, a confidante, a mother and a guiding force. A sister yells at you when you are wrong, she fights with you only to make up later doing something so nice, you turn around and think you couldn't have asked for a better companion. I know a lot of people, who are extremely close to their siblings, so much so that they are inseparable. A sister becomes a friend, when the world turns against you, a mother when you need care. Though, you are born off the same womb, sometimes you are so different, you wonder what binds you to one another? If someone else messes you would kill them, but your sister enjoys the right to even kill you. Or so you think.
If you relate to each of these emotions and have a sister you are extremely close to, I would recommend you to watch Ek Hazaro Main meri Behna Hai, the new show on Star Plus that started last evening. There is so much of warmth in the bond the sisters share, you cant help but shed tears. Their love and understanding towards each other make you wish you had a sister like them. At the same time, there is so much contrast between the two that you cant help but smile.
Manvi and Jeevika adore each other so much that they dont see a world beyond one another. Manvi the younger one is more bubbly and vivacious. She speaks her heart out. You see that this is the freedom she enjoys because her sister allows her to live her life that way. The sisters are almost inseparable. In about half an hour, you also learn Jeevika is in love with Dr.Manan (Abhinav Shukla), who is back on screen after his stint as Dev in Geet Hui Sabse Parayi. The silent love between the two is so adorable and endearing, you almost feel bad as soon as you seem them and realising that their story may not actually see the light of the day. But Manvi is not the one to give up. She readily takes up for her sister, even in front of her family when a rishta comes their way from a Khandaani family. Jeevika however being older and more balanced, understands the ways of the world as well as is obligated to her family that has brought the orphans up. She obviously doesn't want to let them down, especially after their Beeji (Anju Mahendroo) tells them how her son (the father) had let them down.
The last scene at the ghat is not only breath taking to watch, it also leaves you moist eyed. The love between the sisters is palpable. You also witness the wicked twist in fate where Manvi's diya goes off while Jeevika lights it up for her and both the sisters wish and pray for each other's well being.
With so much happening in one episode, there is loads of drama and an interesting story in store for the veiwers. We wish the entire team all the very best!
Rangmunch recommends Ek Hazaro Main Meri Behna Hai to those who have sisters, those who dont, and all those who would love to have a sister like Jeevika or Manvi ! Come one, come all! Watch this show for sure.
Niharika Vidya Sagar
Rangmunch.TV
Ek Hazaro Main Meri Behna Hai Star Plus