A Director is “The Navigator” of the Ship – Rahul Agarwal!

Here is a video where you can catch Rahul explaining a scene to Drashti and Ahwaan during a sequence.

Rangmunch.TV: What prompted you to choose the Media world as a profession?
Rahul: In school, I was always inclined towards extra-curricular activities like drama, elocution, debates, sports, origami, participating in dance competitions, that prompted me to explore my creative talent during my growing up years.
When watching movies, I always had this feeling that someone is watching the actors and keeping an eye on everything around like a secret detective. However, when I grew up, I realised that the secret detective was none other than a “camera.”
So I joined as an Apprentice Director Assistant in Mr. Anupam Kher’s company, and while learning the craft of film-making I realized the potential of the medium as the most expressive one. That’s how I chose media as my profession.

Rangmunch.TV: “A Director is like the Captain of a Ship”, your take on this statement.
Rahul: Being a part of the television industry, I will comment on this statement. Today a Director is divided into two parts, mainly a Creative Director who along with channel and writer brainstorms the story and screenplay, while the other is the Director (someone like Me) who convincingly shoots all of that and enhances the vision of the script. He conceives the characters, and keeps the flow of the story and scenes intact. So a Director is “The Navigator” of the Ship.
Rangmunch.TV: You work as a Freelancer. Have you ever thought of being associated with a Production House? If not, why?
Rahul: I haven’t been approached by any Production House to join them hahhaha! Indian markets don’t have this trend yet of hiring in-house Directors’. Also as a freelancer one has the freedom to choose one’s own project as per his will and time.

Rangmunch.TV: As a Director, what are those few criteria’s that you look into when taking up a new show?
Rahul: Well a couple of things. Firstly which Production House is producing it and which Channel will be airing it.
The creatives of the show are equally important and above all the content. It has to be challenging. If its an ongoing show, I weigh the pros and cons and see how I can enhance the show as a whole.
Rangmunch.TV: One show “then & now” which you would love to be a part of?
Rahul: Every now and then there comes a show which I as a director would have liked to do. I would have love to be a part of many shows in the past which Yash Raj Films had produced such as Khote Sikkay and Mahi Way. Currently I like the new show “Bade Acche Lagte Hain”.  After a long time I have seen a show with good content.

Rangmunch.TV: You have directed shows like Dahejj, Maayka, Bhaskar Bharti, Dil Mil Gaye & most recently Geet Hui Sabse Parayi? Which of these shows have given you the maximum creative satisfaction?
Rahul: I don’t want to sound cliché, but “I love all my shows.” Actually I have grown as a technician and as a person with all my shows. Each and every show has been different, and given me creative satisfaction as a Director. And its not just the show, its also the people working in them which makes each and every show special.
Rangmunch.TV: Does a strong script & good actors make a Director’s job easy?
Rahul: Yes and No .


Rangmunch.TV: Who do you idealise in the field of Direction?
Rahul: I don’t idealise any one per say. But I do have my personal favourites from yester years like Hrishikesh Mukherjee, Raj Kumar Santoshi, Mukul Anand. In the recent times I like Raj Kumar Hirani, Mani Ratnam, Rohit Shetty.
Rangmunch.TV: After Direction, Production is usually the next gradual progression. Will we see you produce a show in the near future?
Rahul: Why just produce a show, I would like to be known as a Filmmaker. 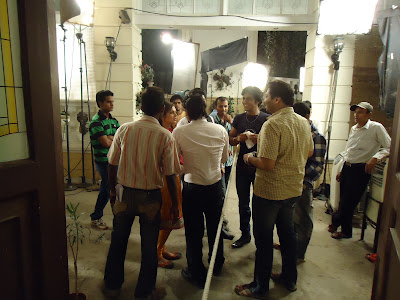 Rangmunch.TV: How important is it for you to feel connected to fans?


Rahul: Connecting to fans today is like seeing the audiences’ reaction during a play....Instant! So it makes the journey lot more exciting.
Rangmunch.TV: Describe “Rahul the Director” & “Rahul the person” in one word or sentence.
Rahul: Rahul the Director is always in search of Perfection, while Rahul the person- let that be personal.
Rangmunch.TV: If you were not a Director, then what would you be?
Rahul: Maybe a Doctor as my father wanted me to be, or Fashion Stylist and have my own label.

Rangmunch.TV: Your greatest accomplishment till date.
Rahul: When I became a
Director and saw my
name being aired for  the
1st time.
Rangmunch.TV: How soon can we see Rahul Agarwal back with his Creative Vision on small screen?
Rahul: Soon!


We at Rangmunch.TV, would like to Thank Rahul Agarwal for this candid interview.
Interviewed & edited by:
Swati Ghosh
Rangmunch.TV
Dil Mil Gaye Geet-Hui Sabse Parayi StarOne