The Age old tale of good over evil!!! 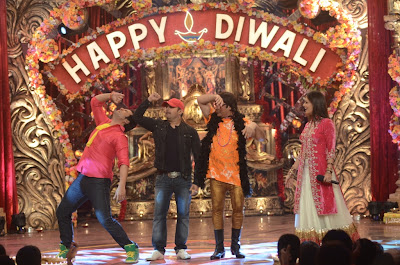 Dassera and Diwali, both these festivals symbolizes the victory of “good over evil” and forms an integral part of our Epic story Ramayana. Dassera is celebrated because its believed, on that very day Lord Ram had saved his wife Sita from Ravan’s evil intentions and put an end to his life, while Diwali is to celebrate the return of Lord Ram along with his wife Sita and brother Lakshman to Ayodhya after 14 years of exile.

As much as we hate Ravan, I strongly believe that Ramayan would not have been so interesting without him. While Ram and Ravan were equally strong individuals both physically and mentally, but it was Ravan’s wrong deeds and cruel intentions that made us take a notice of Lord Ram’s noble thoughts and deeds and glorified him as a character.
Similarly, in the fictional world we have characters like Shyaam or Mamiji of Iss Pyar Ko Kya Naam Doon, Niharika-ji (Ram’s mother) of Bade Acche Lagte Hai, Raashi of Saathiya, Rama Bhabi of Navya, and many more. In every episode they plan and plot against the Protagonist or the Hero (male or female), they spit venom every time they open their mouth, they dominate over the weak souls and last but not the least, they manipulate situations and circumstances to meet their ends. The only thing that matters to them is their well-being by any means. A trend that was set by the likes of Komolika and Ramola Sikand where, the bad one’s made it their one point agenda to ruin the lives of the good ones, the time of the festivals have always been chosen as a symbolic time to show the win of good over evil !

Whenever these characters come on screen they rile us up. We wish that their evil intentions get exposed and they are punished. But as much as we hate them, we cannot deny the fact that its their evilness that eventually glorifies the goodness of our Protagonist or the Hero.
When we see Shyaam’s evil intentions behind his sugar coated words, do we realize how contrastingly good Arnav Singh Raizada is as a person. On the face of it he may be arrogant, impulsive, rude and aggressive towards Khushi but he can never harm her intentionally unlike Shyaam. Similarly when we see Mamiji being rude and bitter towards Khushi and Payal, our eyes start looking for Anjali and our heart yearns for her sweet and comforting words. Had it not been for Mamiji, Anjali’s sweetness would have failed to captivate our attention.

It is these negative characters that create situations and circumstances, which lead our protagonist to emerge as strong individuals and compels us to idealise them. Their manipulative and vindictive nature creates the angst in the story and makes it more interesting. It is because of them that we all want to be like Priya, Khushi or Anjali and dream of a man like Arnav Singh Raizada.

So without the EVIL around, the GOOD would have never got its due credit. Therefore lets thank these characters for giving us our HEROES!!!!