Substitues Or The True Heroes 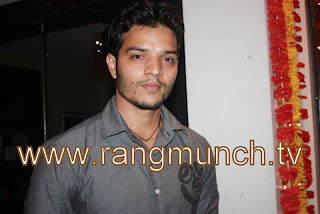 Abhishek who plays the BODY DOUBLE for  Maan singh Khurana in a hit Star One show Geet-Hui Sabse Parayi
When the main lead is absent on the show due to health problems or is off on a holiday , then what does a Production House do ?  Well in such circumstances they appoint a person who can play the character but at a distance. His height , his mannerisms , his attitude gives the viewers a feel of the main lead always being present on the show. In the world of Television these people are called “Body Doubles”.
Rangmunch.TV today introduces you another face that also plays Maan Singh Khurana.  No we are not talking about a replacement here. Gurmeet is unwell, and hasnt been able to shoot for the last few days. The show however must go on, and Maan is still very much a part of the daily episodes. If you are wondering how this is possible, this is a good time for us to introduce you all to Abhishek, who plays Gurmeet's body double in his absence..On quizzing him about his role , his aspirations, his contribution to such a popular show , this is what he had to say…
“I enjoy playing Maan Singh Khurana.MSK has become very popular and is larger than life.My first time as the body double for MSK was when Geet got married the second time round.In reality Gurmeetji  was himself getting married, so I stepped in  his shoes and did the role. I have done many other scenes too where Gurmeetji has been away.Off late I have been also essaying small roles in the background of the Geet .It feels nice to know that you are contributing something vital and show is moving on.Gurmeet ji and Drashti both have helped me a lot in inacting a scene.Even with Dhrasti when the seen becomes a little uncomfortable,she completely relaxes me and help me in the shot.I would love to continue doing MSK till I can and do a lot more too.There is a sense of satisfaction that one is a part of such a pivotal character.”
It was a sheer pleasure getting to know Abhishek and the role he potrays . Today the  body  doubles  have become very popular  and  important to any show.The  show must go on even if the main leads are not present.Body doubles are definitely  the production houses  knight in shinning armour.
Interviewed by: Swati Ghosh and Niharika Vidya Sagar
Edited by: Navyanka Varma
Rangmunch.TV
StarOne