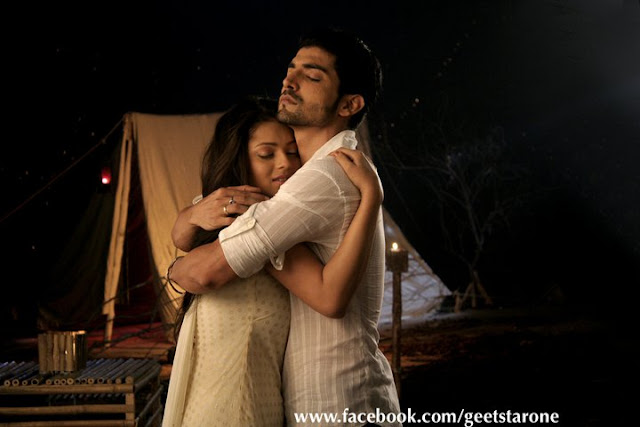 Today’s episode left me with mixed emotions. I was overwhelmed since after a very long time I saw Maaneet for almost 15 minutes and the entire episode was nothing less than a visual treat. However the news of the show coming to an end and the idea of not seeing Maaneet on-screen at some point in time did dampen my spirit for a while. However I could not hold myself back from penning down my thoughts about the episode that left me spell bound.
“Geet kaalash ko gira kar ek baar phir meri zindagi mein pravesh karo”  Geet’s patience and perseverance paid off today. These words from Maan put an end to Geet’s desolation. She finally won her love, her Maan and for us “HUM” is back.
Apparently for me it was more of Geet’s victory than Maan’s. Earlier whenever Geet came across any difficulty, she always had Maan to fall back on. However, this time around destiny played cruel and not only took away Maan who was her pillar of strength, but brought him back as a challenge in Geet’s life by erasing every memory of hers from his mind.
Such is the irony of life that the Man who once gave her the most beautiful memories around which her world revolved had become completely oblivious to her being and Geet had to patiently and persistently make a way back into his life.
For me, Geet is an epitome of Love, Hope, Strength and Positivity. After Maan lost his memory, it was Geet’s self belief & confidence in her love, which gave the strength to hold on to her relationship, irrespective of Maan’s behaviour towards her.
Besides having conviction in her own self, she never lost faith in her Babaji. Usually when faced with so many trials in life, people tend to lose hope and question the very existence of God. But with every tough situation, Geet’s faith in Babaji ONLY grew stronger which in turn gave her the strength and courage to overcome life’s hurdles.
Even now when Maaneet have finally reunited, we should not forget that it is Geet who has all over again won the love & respect of Maan as he is still unable to recall any of the past memories of their journey together.
With Maan making his way back in Geet’s life is good enough a reason for her to look forward to a new dawn.
“What I need to live has been given to me by earth. Why I need to live has been given to me by YOU” ~ Anon
Swati Ghosh
Rangmunch.TV
Geet-Hui Sabse Parayi StarOne