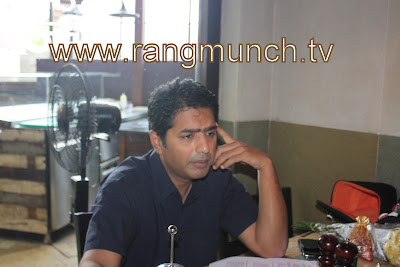 A big fat hello to you all! The day was a huge success for us without even stepping into a single set today. We had the honor of meeting one of the most celebrated talents in television industry – Mr. Siddharth Sen Gupta, the director of the longest running show on television today – Balika Vadhu on Colors.
Confident and extremely knowledgeable with 15 years of television experience behind him, Mr. Sen Gupta is a force to reckon with in the television industry. During the free-flowing conversation with him, we had the privilege of becoming privy to some of the most interesting and hitherto unknown aspects of show making, which will be revealed to you all in due course.

We had the opportunity to look at Balika Vadhu through his eyes, which is one of the most enriching experiences for us till date. We also came to know that he holds veteran actress, Surekha Sikri (dadisa of Balika Vadhu) in the highest of regards as she happens to be a university unto herself in acting. According to him, Dadisa is one of the pivotal characters of the show and has been instrumental in its success. His utmost respect for the actress and her talent was evident in the way he spoke about her.
Watch this space for his interview, which is sure to give you more than a glimpse into the world of show-making.
Rangmunch.TV
Balika Vadhu