By Rangmunchtv September 23, 2011
Last chapter (16)…….
A peal of laughter escaped her; she looked so beautiful that he couldn’t stop himself- he grabbed her hand tightly at her wrist and pulled her close.  Her laughter died and the smile froze on her face as she saw the look in his eyes; for a moment he could see the internal battle that was waging inside her, then she gave in and moved towards him, plastering her body to the length of him as she tilted her lips to meet his.
Chapter 17
They kissed; not another gentle kiss but instead a kiss filled with passion and wanting on one side, and the memory of pleasure and love on the other.  They kissed again and again, his hands roaming her body as if attempting to learn every curve whilst she entwined one hand in his hair and used the other to pull him closer.
Who knows how long they would have stood there; who can say how far things would have gone if they hadn’t been disturbed by the feel of his mobile phone vibrating between them.  Though it stopped ringing before he could answer it, the moment was broken; Geet stood there awkwardly whilst he put his phone away, her arms brought up to cover herself as she became suddenly aware that her clothes were almost see-through when wet. 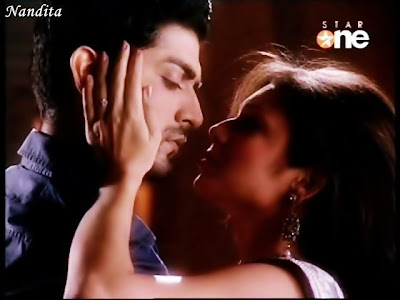 Looking at her face, he realised that if he pushed her any further that day, he risked pushing her back into the defensive shell she had barely emerged from.  He took a deep breath to help restrain his urge to pull her close again, fighting the need to break through her reservations with the strength of the desire suddenly coursing through his body.   After a moment, he shrugged out of the jacket he was wearing and draped it over her shoulders, grimacing ruefully as she drew the edges close around herself.
“Geet, ander chalein? Nahin to thand lag jayegi” “Geet, shall we go home? I don’t want you to catch cold”

She looked up and gave him a half-smile; it was with relief that he realised that she wasn’t going to backtrack and pretend that none of this had happened, though he could sense her hesitation.  It was more than he had expected; he didn’t under-estimate the depth of the emotional trauma he had caused her, he knew it would take time before she was willing to open her heart to him again.
As they started walking back towards the car, she put her arm through his slowly, as if in two minds about the gesture; he didn’t say anything, just put his other hand on hers.  They drove back to the house in complete silence.  Even when Dadi saw them walk into the house soaked to the skin and started creating a fuss, making the servants run for towels, they stayed silent.   As their eyes met, he could see how deep her need to protect herself ran; the barriers were still up, with no hint of what she was thinking allowed to leak through. 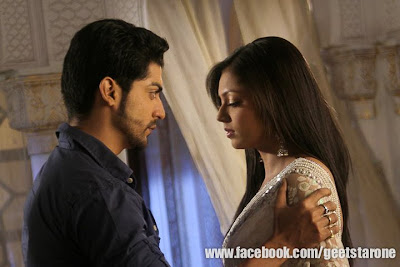 Sighing, he realised again he had a hard road ahead of him.
That night, as he made his way to their bedroom, he reminded himself not to expect too much.  He couldn’t suppress a mad hope that in the hours since he last saw Geet, she would suddenly have realised that he had fallen in love with her again, realised that she could trust him with her heart again.  For a moment, he felt out of control, willing to try anything to convince her; he contemplated whether seducing her would help matters, let him use the physical bond that would be created to worm his way back into her affections.
He stopped outside the bedroom door, angry with himself and how easy it was to fall back into old habits.  It was a sign of his desperation that he had even allowed the thought to cross his mind.  Manipulating her emotions by sleeping with her was something that the old Maan Singh Khurana would have done without hesitation, the one who believed in winning no matter what.  This new Maan Singh Khurana, the one who would rather die than do anything to hurt Geet, knew that she would never believe him if he tried to force things between them.
So he stood for a moment outside their bedroom door, reminding himself to be patient then forcing his unruly body into submission before walking in.  Some small part of him still hoped to find his wife waiting for him; instead he found her bent over the toilet in the en-suite bathroom, retching painfully.   She was clasping her lower abdomen and her face was white with pain as he rushed to her side
“Kya hua Geet”  “What’s wrong Geet”
She gave a wan smile as she took in his frantic expression.
“Aap ke liye ek nayi yaad; kabhi kabhi meri tabiyat aise hi kharab hojati hai” “A new memory for you; sometimes it’s not very nice being a woman, especially me” she gritted out between clenched teeth as she curled in on herself.
He frowned as her meaning became clear then bent to lift her off the bathroom floor. 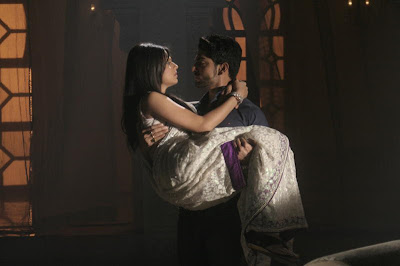 Holding her in his arms, he asked “Geet, do you have any medication?”
She shook her head, biting back a moan.  “Nahin, koi asar nahin hota hai.  Bas ek din bardaasht karna padta hai, phir main theek hojati hoon”  “No, nothing works; I just have to bear it for a day then I’m normally ok”
It infuriated him that he couldn’t do anything to make her pain better; he could feel his anger build, triggered by his helplessness.  Looking down at her as she lay in his arms, his bitingly unfair comment about her inability to look after herself without his help died on his lips as the sight of her pale face pierced his heart.
She looked so vulnerable, her defences down as she lay in his arms, completely dependent on his strength.  It was the first time she had let her barriers down so completely, left herself so exposed in front of him- he knew it was because she was in too much pain to keep those barriers up, but he didn’t underestimate her strength; if she had wanted to keep this from him, she was more than capable of finding a way to hide her weakness.
Unutterably grateful for the implied (possibly unacknowledged) trust she was showing, he carried her over to their bed and lay her down.  After taking a moment to close the bedroom door and take off his belt, he sat next to her and drew her into his arms.  Love made him hold her close all through the night, rubbing her back soothingly when she whimpered in pain; he only hoped that she would be more gracious on waking than he had been when their positions were reversed.
Geet-Hui Sabse Parayi