Up Close & Personal With The Director of “ Bade Acche Lagte Hai”: Sangieta 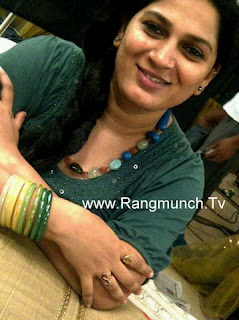 Rangmunch.TV brings  to you a lovely  and a warm chat with Sangeita , the Director of Bade Acche Lagte Hai”.Sangieta  who has given us hit like Shagun,Kussum,Kasauti Zindagii Kii,Karam Apna Apna, and off late Kitni Mohabbat Hai Season 1 and 2 on Imagine TV,is now on her  latest directorial show” Bade Acche Lagte Hai “ BALH is on a all time high  and has caught on with all  the age groups.  Currently we are witnessing  a large scale marriage preparations on the show.Sangieta  has not only pulled it off smoothly but is still carrying on the  excellent  work. Being a women director is not easy especially when you are solely handling the show, but she has marvelled it.
The show is getting amazing reviews  and has placed  itself on the top 10 shows of the week.Here is  what Sangieta had to say when we spoke to her on her  much talked about show….

In this day and age, when TV shows are getting bolder in depicting extra-marital relationships, what made you agree to such a story, which depicts the traditional Indian ideal of love after marriage?
There are always two schools of thought  to this,Arrange marriages  and Love marriages…No doubt love marriages are more happeneing but there are still couples who actually enjoy the experience of falling in love after getting married.So in todays  time  where love happens easily, the concept of being in love after marriage intrigued me.
In this fast changing world do you think that the youth of today still relate to the concept of arranged marriages or are now much more likely to insist on a love marriage?
Well , the youth definitely favours  love marriages  more but , there are  still a  section of people who cherish the thought of arrange marriages. So its actually on ones perception,on how they take it.Personally I feel  commitment  is the only thing that counts,be it whether  love marriage or arrange.
What makes Ram Kapoor & Sakshi Tanwar fit the roles of Ram and Priya perfectly?
They are great actors to begin with and are brilliant on  screen.No one could have suited the role better.Both Ram and Saakshi  are the right choice for playing out Ram and Priya.
There is constant criticism of how most shows start with a fresh and innovative story concept but eventually turn into Saas-Bahu sagas. What do you think is the reason behind it?
Well when the story kicks off, there is usually a lot to tell between the lead pair.But as soon as the leads are  married , the story comes to a halt and  nothing is left to explore further .  We directors  get very little scope and turn the wheels towards the saas-bahu drama.Hopefully you would not  get to see that on this show.
In 21st Century, when women are more career oriented & families are equally supportive towards their daughters, do you think that the obsession that the character of Shipra had with her unmarried daughter is realistic?
Not really…There are mothers who are very much still concerned on  seeing their grown up daughters getting married and settling down ,especially if they have crossed the marriageable age.Every mother wants the best for her child.Only balance has to be maintained.I too have a hectic work life and  am married, so I too have to strike a balance.Hence  I would say its not unrealistic as 35% of mothers will  be mothers who desires  to see their daughters  settled ...(smiles)
What about your show do you think has gripped viewer’s attention considering it has been loved and well received right from day one?
Hmm….I would say the uniqueness lies in how Ram and Saakshi  have potrayed  the characters and now are living it beautifully,also that no one  on the show is really outright negative but have  shades of grey .We have tried to incorporate a  fun element  from time to time which brings in light moments with subtle humour.This show is very relatable as every house does have a Ram, a Priya or even Ayesha.

Marriages are a huge deal on Television shows with no compromise on all the pomp, splendour and glamour. With the current track focusing on the upcoming shaadi's of both Ram and his sister Natasha, as a Director what is the mental preparation that you had to do to make it look different? Does being a woman help at times like this to add a little more sensitivity to the execution??
Oh it’s a lot of hard work as the marriage sequence  has to look real with all the nitty-gritties.Mentally one has to be charged up as lot of energy is spent  on a track like this.But being a women definitely helps when  relating to a scene .For instance explaining a bidai scene,if  coming from a woman  becomes  more relatable. I do improvise on it and give my personal insights  since I too have gone through it ,hence execution becomes easier.
Recently there was an article which said that on viewers demand the channel & PH has asked Ram Kapoor to reduce his weight. Is this why the idea of diet & the doctor advising weight loss program for Ram Kapoor has been seen in the story or was it always a part of the story?
We just  added  that  bit for light humour.Ram is very supportive  and comfortable when it comes to his weight .He rathers cracks jokes on it..( laughs)
Seeing the unconventional way the story has moulded, do you believe in destiny?
Oh definitely..Destiny does have a role to play in everyones  life.You can  do all the work you want , but if fate is not with you then  the journey becomes  tougher.
What kind of equation do you share with Ram and Saakshi?
I share a wonderful  bond with both Ram and Saakshi.They both make it very comfortable for me to do my work.Ram is fun so he relieves the stress   level and Saakshi is  a warm loving person and we do share  our girl moments..( smiles). I am enjoying every bit of my work.Though it does  drive me crazy but is fun when you have such amazing and talented actors to work with.
Since you have a Co-Director also on the show, how do you deal with each other's views & thought processes.
Well  its only me directing it  now.Earlier there was another Director working with me and we worked as a team but he is now  involved in another show so its only me calling the shots..
One favorite scene of yours so far which you have loved directing?
I’l  give you two scenes.They are my personal favorite.One is the scene where Priya and her father are in his room and he shows her a bag of all the little things he has collected over the years and the memories attached to it.The emotions between  a  father and daughter were beautifully  captured where words were not needed…The second scene was shot last Thursday where Priya’s bidai is happeneing  from her house. She goes silently through all the rooms and touches  all the things which define her.The  sadness, the tears and finally the breakdown was  exceptionally done.Saakshi brought  life to that shot .She made it  believable and real.
What message would you like to give your fans?
I would like to thank all our viewers for  such an amazing response and the love showered on  us.We promise to keep bringing in good stuff and entertaining  you with our best possible work.Take care and keep watching !!
I had a great time doing the interview , hope you  had a wonderful  time  reading it.Rangmunch sincerely thanks Sangieta for her valuable time .
Navyanka
Rangmunch