By Rangmunchtv August 06, 2011
As the weekend sets in, it’s a perfect time to re-visit the various events that have been highlighted on our favourite shows. This week most of the shows have gone through some major high points, vital revelations, which have brought all the stories to a crucial juncture leaving all viewers anxious for the forth coming week.
Geet Hui Sabse Parayi 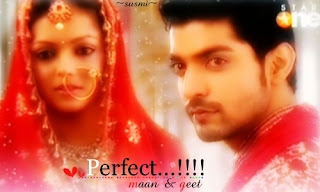 “I might not get to see you as often as I’d like, I may not get to hold you in my arms at night, but deep in my heart I know that it’s true. No matter what happens….I will always love you.” ~Anon
Nayantara is back with her evil plans & today we got a glimpse of her destructive mind, as she succeeds in creating a further rift in Maaneet’s relationship. Maan who was oblivious to Geet’s identity is suddenly exposed to the truth & reacts vehemently. Maan in his mode of denial goes ahead and humiliates Geet not realizing that he is actually demeaning himself & his wife in real. But the beauty of today’s episode is that even though the viewers may hate Maan for his rudeness, but his Geet still loves him. She knows & understands her Maan way better than any one of us. Geet knows that Maan can never hurt her even in his wildest dreams but the irony is, her Maan no longer remembers her. But as much as Geet loves & understands her Maan, she is unable to forget how much he valued his relationship & marriage with Geet. She cannot let anyone question her Ma(a)n, not even the ignorant Maan himself & therefore succumbed to the situation & decided to leave.
So will Maan eventually stop Geet from leaving & accept her? Will Dev be able to stop a vindictive Nayantara from causing any further destruction in their lives? Will Nandini get to know what’s bothering Dev?
Iss Pyaar Ko Kya Naam 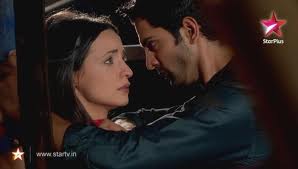 Its now revealed that Shyam is Anjali’s husband. One feels sorry to see that someone as sweet as Anjali, is slowly heading towards a severe heart-break. Shyam is not only a smooth talker but is a complete charmer who has spell bound not only the entire Raizada family but also Arnav Singh Raizada. Even Buaji misses Shyam in his absence while Khushi & Payal considers him to be their friend & confidante. Despite the fact that Shyam is married to Anjali, he still pursues his love for Khushi. He cannot see Anjali sad, but he cannot stop himself from loving Khushi either. He justifies as he believes he is not making anyone sad in the bargain. He is extremely manipulative & intelligently manages to balance both these worlds without raising an inch of doubt on either side.
Will Shyam turn into an obsessed lover? Will Khushi get to know Shyam’s real identity? Will Arnav find out about Shyam & his love for Khushi?
Navya

Both Navya & Anant have been basking in their new found love. However the truth about their relationship is now revealed to Navya’s elder sister Renuka & her mother. Though Renuka has been supportive towards her sister, but her mother is definitely angry & upset with this revelation. As much as Navya wanted to disclose the truth to her mother, she is now upset that her mom found out about Anant before she could explain things to her. On the other hand Anant’s brother gets to know about Rama’s conspiracy behind organising the get-together & inviting Navya.
Will Navya be able to explain things to her mother? Will Navya’s mother stand by her or will she disclose this truth to the rest of the family? Will this revelation impact Navya’s relationship with Anant? Will Anant get to know about his Bhabhi’s malicious motive?
Sasural Simar Ka

Simar’s marriage turned into Roli’s nightmare. Roli pays a very heavy price in trying to help Simar pursue her dreams. On the day of the marriage while Simar goes for her dance show, she leaves Roli behind in the bride's attire to disguise herself as Simar till she returned. However destiny plays foul & Roli is forced into the wedding rituals. When Simar gets back home, she sees her younger sister Roli taking the marriage vows with Prem. While the whole world thinks its Simar & Prem who are now married, Simar is shattered with the thought of deceiving her loved ones & for ruining her sister's life.
Will Simar tell the truth to Prem? Will Prem be able to forgive Simar? Will Roli be able to accept Prem as her brother–in-law? Will the story turn into a love triangle?
Gulaal

Sometimes we try to hide a bitter truth to save our loved ones from getting shattered but in the bargain land up hurting them the most. We witnessed a similar thing in Gulaal this week.
Gulaal hid the truth about Vasant’s murder from her in-laws coz she thought after Vasant’s murder, they will be further devastated if they got to know that the murderer was none other than Dushyant, his cousin brother. It was the toughest choice Gulaal had made for the well being of her family. But to her dismay, finally when the truth is out in the open, the entire family has turned their back on her for keeping them away from reality. The women of the family even went to the extent of questioning her character. Seeing so much of hatred in the eyes of those she loved the most, Gulaal must have died a thousand times. Gulaal never thought that she would have to pay such a heavy price for doing something with good intentions.
Will Gulaal circum to all the hatred from her dear ones or will she be able to explain her stand to them? Will Kesar be able to help Gulaal in winning back the trust of his family? Will Gulaal eventually acknowledge Kesar’s love for her?
So in the forth coming week we will get to see & realise if the revelations were really BETTER or BITTER as the story unfolds.
Swati Ghosh
Rangmunch.TV
Geet-Hui Sabse Parayi