StarPlus: Karan Khanna’s pays a special tribute to his grandfather! 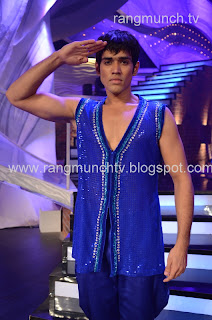 Karan Khanna one of the best dancers from STAR Plus’ biggest dance reality show Just Dance dedicated the performance to his beloved grandfather who he lost some time back. Karan who still remembers the day when his grandfather took his last breath in his arms, couldn’t stop himself from paying a tribute to the man he loved the most.
Karan performed the act with so much of grace and emotions that in the end of this performance he actually broke down. His eyes had tears and in his hand he held his grandfather’s shawl which he used for the performance.


May be this was the reason that the projection of Karan’s emotions was so intense that even the judges could feel his sorrow. The act had everything that the judges were looking for emotions, expression, dance and most importantly pain.
An emotion always attaches a personal touch to what you watch. So hold your emotions as you watch Karan performs this for his dear grand father.
Catch Karan Khanna pay tribute to his grandfather only on ‘Just Dance’ every Saturday to Sunday at 9pm only on Star Plus!
Edited by:
Niharika Vidya Sagar
Rangmunch.TV
Star Plus