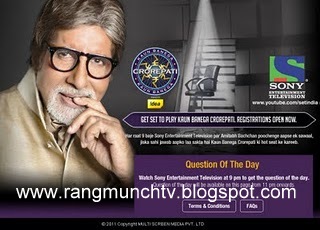 Rangmunch.TV brings you the news that KBC topples other shows across channels to take the no 1 slot with an opening of 5.2 TVR.
Mumbai, August 25: Sony Entertainment Television continued its dream run, and replaced Colors from the No 2 slot among GECs with a strong 245 GRPS across markets. Empowered by the best fiction and non- fiction shows for its viewers, Sony Entertainment Television has become the Most Watched Television channel and is the No.1 channel in primetime with 154 GRPs.
Mr. Amitabh Bachchan’s charisma seems to have taken centre stage once more with KBC’s opening at 5.2 TVRs making it the highest recorded for any non-fiction show this year.
SET’s fiction shows have shown a stupendous increase as well, where, ‘Bade Achhe Laggte Hain” struck a chord with the males and females alike and garnered 3.7 TVR for the current week was followed by ‘Saas Bina Sasuraal’ at 2.4 TVR. ‘CID’ continued to thrill the audience with an average rating of 3.5 TVR, supplemented by ‘Crime Patrol’ at 3.1.

The strong line up of shows in both categories of fiction and non-fiction propelled Sony to a very strong No 2 position among Hindi General Entertainment Channels.
Sony Entertainment Television #2 channel Across HSM Markets
*Source: TAM | CS 4+ | HSM Markets, Week 35, 2011
Delighted at the channel performance, Ms Sneha Rajani, Senior EVP Business Head, SET, said “KBC 2011 has been the only non-fiction show to open above 5 TVR this year on any Hindi GEC. We are delighted at the performance of all our shows and over the next 4 to 5 weeks we will further consolidate our position. We are confident that fiction will be the main growth driver on the channel. With a slew of promising new shows SET will be a channel to watch out for.”
Commenting on the stupendous numbers for SET, Mr NP Singh, COO MSM, said “2011 has been a very good year for us. Sony Entertainment Television is on an upward curve. With the excellent opening of Kaun Banega Crorepati, the fantastic performance of all our  fiction shows and non- fiction shows  we are ready for the next level of growth for the channel and our upcoming shows will simply add to the great performance of the channel.
As always Rangmunch.TV will keep you posted on all the latest developments in the TV land @unplugged.
Edited by,
Niharika Vidya Sagar
Rangmunch.TV
Star Plus