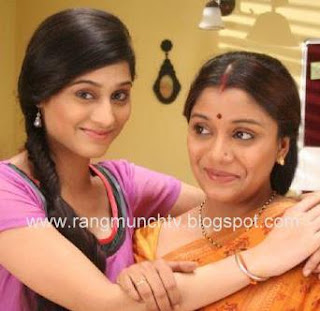 Soumya Seth and Kshitee Jog as Navya and her mom


Navya's episode last night, had one of the most heart-touching mother daughter sequences on Television in a long time. I was simply moved by the sensitivity of the scene, and how such a small sequence had to so many emotions to show with so little words to say.


Navya whose relationship with Anant is now out in the open in front of her mom, is ready to admit to it in front of her other family members as well. However, her mother steps in at the nick of time and covers up for her. This behavior confuses Navya, as she had earlier invoked her mothers wrath on learning about the affair.


The beauty of the scene was brought out when the close and deep bonding between a mother and daughter was brought to the fore, especially with a true to life performance by Khsitee Jog, who has always shown a natural performance as Navya's mother. The sketching of her character has been so beautiful that any woman or a girl would easily relate to her and her concerns. For once even i was moved to tears as i realised, what if i were in a hypothetical situation like it. Who would i choose? Would i be willing to fight for my love when i know i am hurting and offending my mother so much?
Meeta, after covering up for Navya, takes her into her room, hugs her while the mother and daughter shed a few tears together hugging each other, one begins to wonder if she has melted. Tables turn as Navya is the one who ends up consoling her mother in turn for offending her. This is when Meeta starts of by kissing her daughter, apologizing her for raising a hand on her, lets her know, she is ready to put all this behind them, on one condition that she should now forget Anant and never meet him again. This leaves Navya definitely aghast, but she does abide as she is totally swept by her mothers love for her.


It is not everyday that one gets to see a performance of this kind, as the emotions involved in it were galore.


Hats off to the actors Khsitee Jog and Soumya Seth for bringing it out so beautifully and a thumbs up to the Writers and the Director Ravi Bhushan for having executed it in the most heart-wrenching manner!